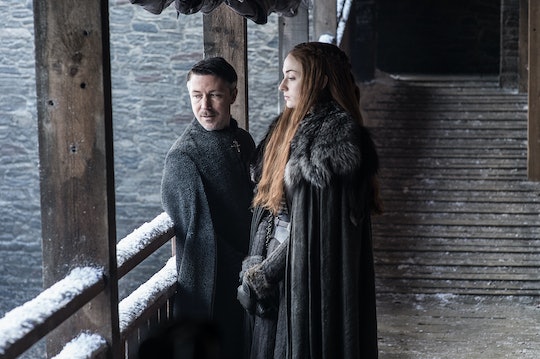 Littlefinger Wants Something From Sansa On 'Game Of Thrones'

Petyr Baelish is beginning to make me think of a mosquito bite that just never goes away, and Sansa seems to feel the same way on Game of Thrones. So, what does Littlefinger want from Sansa on Game of Thrones? Sansa at least believes she knows. In Episode 1 of Season 7, as Sansa is at Winterfell brooding while watching Brienne train Podrick below, Littlefinger comes up to her and starts talking, as he does. When Brienne interrupts them and he leaves she asks Sansa, "What does he want?" to which Sansa replies grimly, "I know what he wants." But does she really know?

Clearly, Sansa believes that Littlefinger is trying to marry her to gain control over the North. This theory definitely has merit, and it is what I personally tend to believe. By marrying Sansa, Littlefinger could basically usurp her power because he is the man. He could also argue that because Jon Snow is not the legitimate child of Ned and Catelyn Stark, he's not a real Stark and is therefore ineligible to be King in the North. He would therefore position Sansa as the true heir, and thereby make himself the ruler. This would explain why he seems so bent on sowing distrust between the siblings, and forcing a wedge between their bond.

In an interview with Entertainment Weekly, actor Aiden Gillen who plays the loathsome Littlefinger confirms that his play of driving Sansa and Jon apart was pretty clear. But he also goes into a little more detail of what his relationship with Sansa will look like in Season 7.

But there's another theory floating around about Littlefinger's motives, which may change if he feels that Jon Snow and Sansa are no longer his best chance for taking the Iron Throne. Littlefinger may feel like his best chance now is to go straight to the source and marry Cersei herself. If Littlefinger brings his very helpful knights of the Vale, who saved the Starks in the Battle of the Bastards, perhaps the two could actually maintain the throne and rule Westeros after all. It's a long shot, but it is theoretically possible. Personally I'm inclined to discount this theory because Littlefinger has spent so much time trying to bond with Sansa, and we would have seen some of this plan go into motion by now.

One thing is for sure, however. Littlefinger is up to no good.