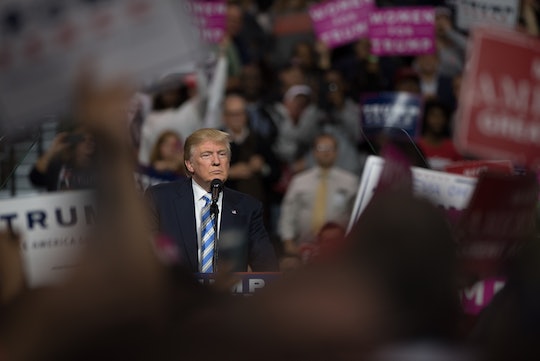 What Does 'Lügenpresse' Mean? The Troubling Phrase Has Been Recently Revived

Shortly after a video captured two Donald Trump supporters chanting the word “Lügenpresse” at reporters, many on social media and overseas began to shed light on the troubling phrase that has been recently regaining traction during the vicious 2016 presidential race. But what does “Lügenpresse” mean? While the German phrase is translated to mean “lying press,” the defamatory word has dark origins dating back to the mid-1800s and was used by the Nazis to scrutinize the media.

The video of the phrase being used was captured by BuzzFeed’s Rosie Gray. “After the rally finished, one man approached the press pen and shouted insults, accusing the media of being in the tank for the Clintons and being "bought and paid for," Gray wrote of the encounter.

Another man, wearing a Make America Great Again hat and holding a sign with the same slogan, walked up beside him and began yelling at the press that we were "lügenpresse," adding that the phrase means "lying press" in German. The first man started shouting it too, then turned to the second and made a self-deprecating remark about not pronouncing it right.

According to The Washington Post, the word was used by both the Nazi regime and the East German government and was ultimately turned into an anti-Democracy slogan.

In fact, “Lügenpresse” is such a defamatory word that it was branded a taboo word in Germany in 2015 by an academic panel of linguists after anti-Islam movements started using the word to describe journalists, according to The Washington Post. And although the direct translation may not seem overly offensive to many, in modern-day Germany “Lügenpresse” carries an ugly meaning and an upsetting history.

For example, the context behind the term “Lügenpresse” was an important tool for propaganda minister Joseph Goebbels' agenda for Nazi Germany under Hitler's rule, in which millions of people — including Jewish political opponents, and homosexuals — were killed in concentration camps from 1933 to 1945.

In present day, “Lügenpresse” has been used by German far-right anti-immigrant groups and American alt-right circles, which is an ideology that tends to reject mainstream conservatism in the United States. Although the alt-right movement has no formal ideology and is a relatively small group, they generally support Trump and oppose immigration, multiculturalism, and political correctness.

Modern-day Americans embracing this troubling phrase used by the Nazis to describe reporters is a stark reminder that in these final weeks of the campaign that Trump indeed holds strong influence over many of his supporters and their ideologies.