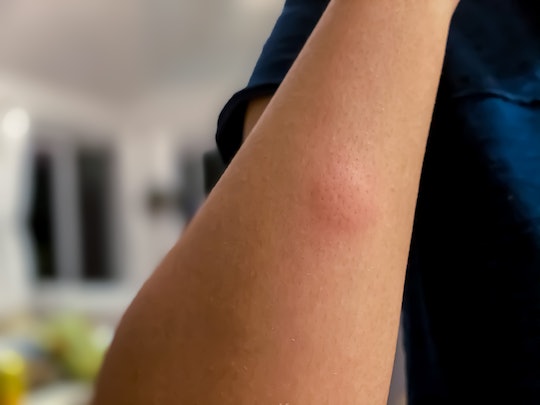 Here Is What Lyme Disease Looks Like In Children

Every child looks forward to spending their summer days exploring and getting messy outside. Unfortunately, in addition to the need for nightly baths, summer brings a specific set of ailments, including Lyme disease, which can be dangerous if the signs aren't spotted and treated in time. Parents of kids who spend their days romping through grass, wooded areas, or by water should know what Lyme disease looks like in kids, so that they're as prepared as possible.

According to Kids Health, Lyme disease is the leading tick-borne illness. The tiny bugs can transport the disease to humans after feeding on infected animals. Luckily, Huff Post noted that only a small percentage of ticks are infected with the bacteria that causes Lyme disease. So a child's chances of contracting the illness after a bite is rare, even in areas where infected ticks are common.

Although the sickness sounds like the stuff of The Walking Dead-esque horror, Lyme disease isn't usually as serious as it sounds and, if it's caught and treated in time, the sickness won't progress into the more serious stages. The Children's National Health System noted that Lyme disease is a multi-phase sickness that increases in severity. The symptoms can present themselves differently in different children and it usually affects the whole body, with potential long-term effects if not treated.

According to the aforementioned Kids Health article, the most common symptom, and the first phase of the illness, is a rash that appears pink in the center with deeper red rings surrounding it. The rash can appear several days after a tick is found on the skin. It may also disappear and come back, be very large or very small, and itch or feel hot to the touch. The rash is oftentimes harder to spot on people with darker skin, and may not appear at all. It can also be accompanied by flu-like symptoms.

If the rash is left untreated, the second phase may begin anytime from a few weeks to a few month later. According to the Boston Children's Hospital, if the rash progresses, you may notice signs of exhaustion and general unwellness. Lyme disease can lead to heart irregularities, coordination problems, weakness, and even learning issues and hepatitis, the aforementioned Boston' Children's Hospital article noted. It's impossible to tell how the bite will affect each individual and there is currently no vaccine to protect from the disease.

The final stage of Lyme disease most commonly presents in the form of arthritis, the aforementioned Boston Children's Hospital piece noted. The arthritis can move from joint to joint, and generally goes away entirely on it's own after a while.

If you notice any of the symptoms above after your child has been playing outside, be sure to take them into the doctor as soon as possible. Most cases of Lyme disease are treated with an antibiotic.

To prevent Lyme disease from happening in the first place, the Mayo Clinic suggested dressing your kids in lightweight, long sleeved clothes if you know they'll be playing in areas where ticks may be. Socks, closed-toed shoes, and hats can also help, since ticks cannot bite through clothing, unlike mosquitoes. Summer is the perfect time for being outside, and no child or parent should live in fear of ticks or the sicknesses the may carry. Instead, take necessary precautions and watch for the early symptoms and let your kids be kids.

More Like This
From Captions To Gifts, These Are All The Kindergarten Graduation Ideas You Need
Can You Help Your Baby’s Hair Grow?
Everything You Need To Know About Postpartum Blood Clots
Here's When Your Baby Might Start Sleeping Through The Night For Real