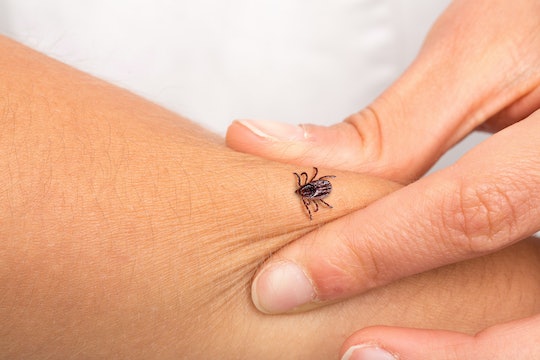 What Does Lyme Disease Look Like In A Toddler? Experts Describe The Symptoms

When your children are first born, you have to work hard to decipher certain cries and fussy moments. Between being hungry, tired, or uncomfortable from the 10-piece outfit you just squeezed over their heads, the list of reasons is long. But as they get older and you learn more about parenting, you also begin to figure out what their various tear-filled whines mean. One in specific? The sick cry. And as summer rolls into full swing, it could also mean one thing in particular — a tick bite. But what does Lyme disease look like in a toddler?

Experts say common symptoms that point to Lyme disease include severe fatigue unrelieved by sleep, a general feeling of being unwell, difficulty making decisions, confusion, fevers and/or chills, headaches, joint pain, and dizziness, according to LymeDisease.org. Basically? The symptoms could make you think your child is suffering from nearly anything. That's why it's especially important to watch for these signs after your child has been outside and rolling in the grass or near a wooded area. Even cuddling with pets who have been outdoors can be a way for them to make contact with ticks.

As for visible skin symptoms, Dr. S. Daniel Ganjian, a pediatrician at Providence Saint John’s Health Center in Santa Monica, California, tells Romper in an email interview that "90 percent of the time, Lyme disease presents with a red round rash with central clearing, similar to a bullseye."

But because there is a chance the rash might not appear, it means you won’t always get a heads up when a tick has bitten your child. That's why keeping an eye out for symptoms is especially important.

An earlier sign of a tick bite is a small bump or redness that occurs immediately and resembles a mosquito bite, noted the Centers for Disease Control and Prevention (CDC). This irritation generally goes away in one to two days and is not a sign of Lyme disease.

If you do suspect Lyme disease in your child, then Ganjian says it’s important to visit a healthcare provider. Because testing in the early stages of Lyme disease can be unreliable, doctors will make a diagnosis based on the presence of physical symptoms, such as the rash, noted the Boston Children’s Hospital.

Lyme disease is often treated with antibiotics and, when caught early, most children will make a full recovery. Following treatment, it is not uncommon for patients to notice lingering symptoms of fatigue, pain, or joint and muscle aches, according to the CDC. In a small percentage of cases, symptoms can last for more than six months.

The most important advice? You know your child best. If you suspect something is a little off, then it's time to head to the doctor.