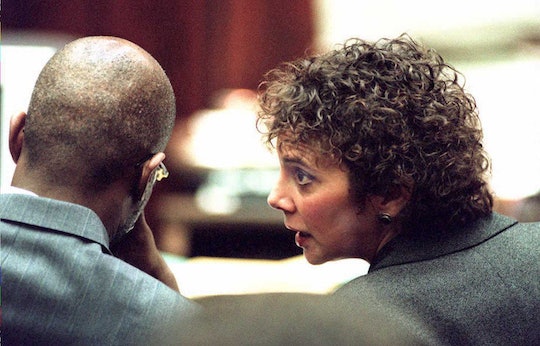 What Does Marcia Clark Think Of The Christopher Darden Romance Plot On 'American Crime Story'? The "Essence" Is Right

Since the 1995 murder trial of O.J. Simpson, rumors have swirled that prosecutors Marcia Clark and Christopher Darden were more than just coworkers. Although the pair refuse to confirm or deny that they ever had a romantic relationship, The People v. O.J. Simpson: American Crime Story has injected some subtle hints that some viewers feel imply that the rumors might be true. So what does the real Marcia Clark think of ACS portraying a romance? Clark told Vulture that the show is "delivering the essence of our relationship."

While the FX series is never so brazen as to show the two sneaking off to a supply closet, there are a few moments — particularly in episode 6, "Marcia, Marcia, Marcia" — where Darden could be construed as either a supportive friend and colleague or a man who's falling in love. When things aren't going well for Clark, Darden squeezes her hand. He writes her a note telling her that her infamous haircut looks "fantastic." He even compliments the nude photos of Clark that appear in a tabloid. While some might label that as sexual harassment, Vanity Fair reported that in her book, Without a Doubt, Clark welcomed the comment:

I laughed. Then we both started to laugh. And we laughed and continued laughing until we were actually howling. With a single bawdy quip, Chris had managed to restore my perspective. How, I asked myself, does he manage to do that?

Clark has consistently described Darden as her rock. When speaking to Entertainment Tonight before the series premiered, she said, "Sometimes it would really get to me. And he would be there to say, 'It's alright, it's going to be okay. If we just keep putting on the evidence, they'll get it. They'll get it.' He was a great partner, and I hope they show that."

When she spoke to Vulture, Clark said that they never danced together in her office, as portrayed in episode 6, but, "It's an essential truth even if it's not a literal truth." The trial took an emotional toll on her, but "He was so important to me. If you're gonna be in the middle of a war like that, you have to have a good trench mate, and he really was."

While Clark was initially aprehensive about the series, she's been watching along with America every week, and is impressed with how accurately the trial has been depicted. "They can't get everything right. But they get the big stuff right. And God, what more can you ask than that, seriously?" Whether viewers think the joking and the hand-squeezing is the behavior of close friends or lovers, the point is, that's really how it was between the two of them, and if Marcia Clark's happy, I'm happy.