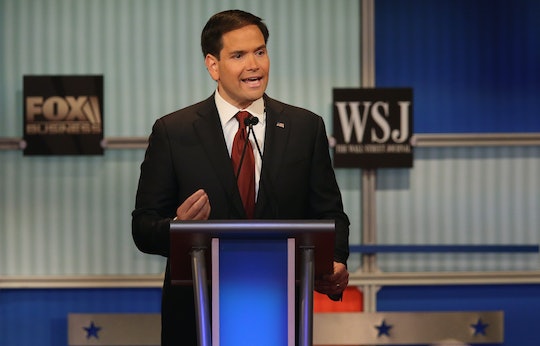 During the fourth GOP primary debate Tuesday night, one of Florida senator Marco Rubio’s big moments came when he was talking about his “pro-family tax plan.” Even though Rubio had a little Freduian slip when he swapped “parent” for “president” when talking about the most important job in the world, it was still clear that the father of four is super passionate about serving families. But how much does that relate to his plans for the economy?

Back in March, Utah senator Mike Lee and Rubio detailed their tax reform plan in a Wall Street Journal op-ed. In a key line, they said, “Our plan will also put an end to the unfair treatment of our ultimate investor class: America’s moms and dads.” As for what that actually means, the pair said married couples and parents wouldn’t face the same “penalties” they do under the current system. They explained that the plan “would create a new, $2,500 per-child tax credit. This credit — like the correction of the marriage penalty — eliminates an unfair distortion in the code and helps level the playing field for working families.”

Now an official contender for the GOP presidential nomination, Rubio has doubled-down on his plan. In an article written for Fox News in September, Rubio said his tax plan would help middle-class parents by providing a new $2,500 child tax credit. “I know from firsthand experience how expensive it is to raise children in the 21st century, and I believe our tax code should support parents rather than drain their budgets,” he said, explaining “empowering struggling families” is one of his top goals. Impressively, Rubio also has plans to promote paid family leave by providing tax credits to employers who offer that. (That’s at least a step in the right direction.)

That all sounds good and well, but something has to give. To make his plan happen, Rubio said the necessary money would instead come from repealing Obamacare and consolidating higher education tax credits. Beyond that, critics have noted Rubio’s tax plan is really designed to help the wealthiest Americans, and would lead to some major deficit issues. As New York’s Jonathan Chait put it: “Rubio’s plan would reduce federal revenue by $11.8 trillion over the next decade. The entire Bush tax cuts cost about $3.4 trillion over a decade, making the Rubio tax cuts more than three times as costly.”

Although most families would probably benefit under Rubio’s plan in the short-term, what it means in the long run for the economy isn’t something that can be overlooked — at least if we care about the future generations of our families.