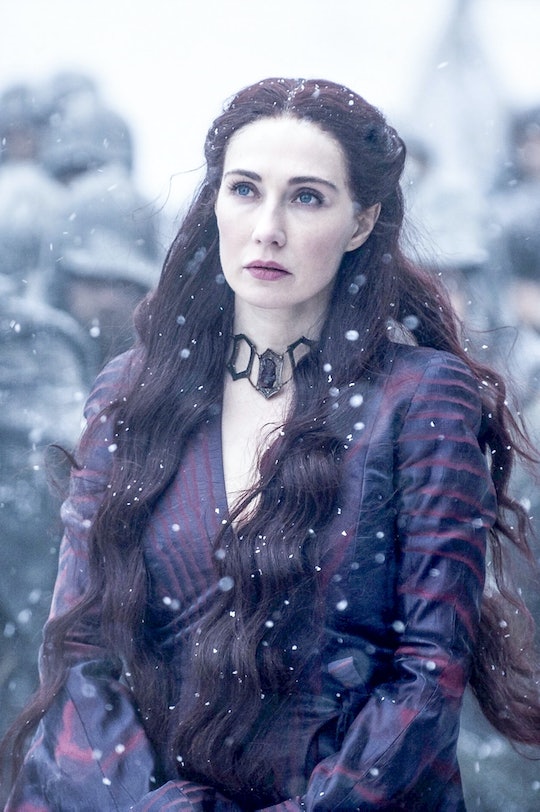 What Does Melisandre’s Necklace Do On 'Game Of Thrones'? It's Pretty Important

The season premiere of Episode 1 of Season 6 of Game of Thrones gave little answers to the unending, and honestly cruel, questions Season 5 left us with. Avid viewers across the country were left wondering if Jon Snow was really dead, if The Mother of Dragons would successfully and safely find her way home, and — most importantly — after that scene at episode's end, what does Melisandre's necklace do?

At the very end of the first episode, Melisandre turns into an old, decrepit, and honestly, close-to-death woman the moment she takes off her necklace. If you look closely (thanks to the Many-Faced God for DVR) you can see the stone of her necklace change colors the moment she removes it from her person. Shortly after, she transforms, suggesting that her necklace is capable of preserving her (or anyone else's) youth, or at the very least, activates glamour to whoever wears it. The scene left viewers wondering if her choice to remove the necklace was totally normal — like, say, part of her evening routine — or if it was hugely foreshadowing in some way. After all, her visions of Stannis becoming the King of Westeros failed to come to fruition, and with the fate of Jon Snow hanging delicately in WTF is going to happen to him territory, the necklace feels like it could mean a lot to this season. Removing the necklace, in a way, felt like Melisandre admitting that things aren't playing out the way she thought they would — and that's a side of her we don't normally lay eyes on.

Her magic has been mysterious from the very beginning, so it's somewhat naive to assume that her late-episode transformation is indicative of anything life and/or story changing. However, her mystery is the very reason why the removal of the necklace (and her drastic transformation) is so shocking during this episode. Once she took it off, the questions were free-flowing: How old is Melisandre? What are her intentions? What will she do with either her age, or her necklace-giving youth? Is she good? Is she evil? Is she anything we have seen so far, or is she another being entirely beyond our comprehension until the writers of Game of Thrones deem us worthy of the truth? (Yep, this show will be the death of me, I'm sure of it.)

Honestly, it's just best to assume we'll never know until the knowing crushes our Game of Thrones-loving souls. At the very least, we know this: The necklace is hugely important, and the fact that it can come off her neck could mean yuge —YUGE — things for Jon Snow.