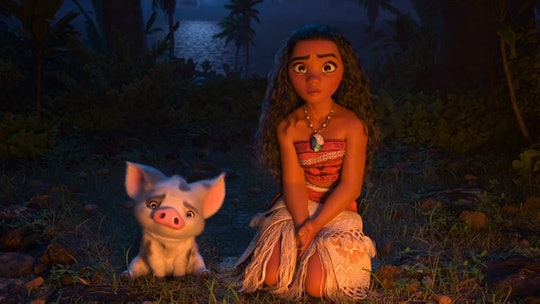 What Does Moana Mean? The New Disney Monicker Has A Powerful Meaning

Authors usually take a lot of time and care finding names for their characters, and so do the directors of Disney. Understandably so, their animations are practically their children. Except unlike most parents, the creators have a hand in which of their "kid's" genes become activated. Disney writers have switched on some pretty powerful chromosomes for their most recent leading lady, Moana, in Disney's Moana. There's no doubt that Disney had a tough task ahead of them when trying to find a name that matched the brave, empowered 16-year-old's greatness. The name they landed on is a gem, and fits the ocean adventurer like a glove. It's no mystery that Belle means beauty, but what exactly does Moana mean?

Moana means "ocean, wide expanse of water, deep sea" in Maori and Hawaiian, according to SheKnows. The teen is deeply connected to the ocean, so it's great that even her name represents her aquatic agent. As stated by SheKnows, "People with this name have a deep inner desire to lead, organize, supervise, and to achieve status, power and wealth." Moana is a natural leader in her film. She is able to establish and complete a mission while leading those around her. The minor even has developed skills of persuasion, and utilizes said talents to keep her team motivated and on track.

Moana proves herself as an able leader in another way. She wholeheartedly trusts in her abilities and herself. People are made up of 75 percent water, but in Moana's case, she might just be a walking ocean of confidence. Even though she is so very young, Moana is the daughter of a chief, and therefore has expertise beyond her years. She has been trained to read problems cooly, and map out solutions with ease. Like water, the future chief is fluid, knowing how to adapt to her surroundings and colleagues. Demigod Maui may be the physical shapeshifter in this story, but Moana can metamorphose her soul. Respectively, Moana is able to get along with all walks of people, and non-people, like chickens, pigs, demigods, and goddesses. She even uses the medium of water to bond herself to others like quenching her pig Pua's thirst.

When it comes down to it, the ocean may have chosen Moana, but she accepted its mission out of her own free will. Just like that, instead of turning away from her destiny and going against her name, Moana decided to open herself to it. Throughout the movie she wears a shell necklace as if wearing her love for the ocean on her sleeve.

And when the waves crash down on her, she simply learns to ride out the hard times, and keep getting back up again in the same way the tide regularly pulls back the shore.