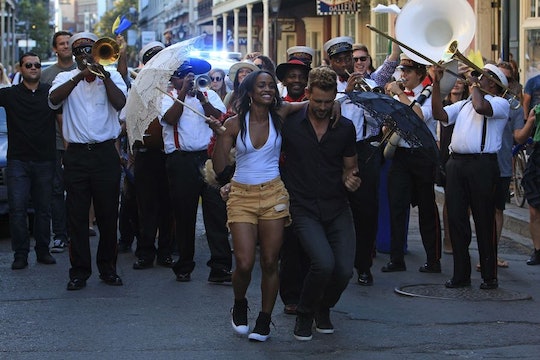 Nick Viall Is So Supportive Of Rachel's New Gig

Though Nick Viall's season of The Bachelor hasn't come to a close yet, ABC has already gotten a jump on the next season of The Bachelorette by announcing their leading lady: Rachel Lindsay, the smart and cool lawyer with whom Nick had an immediate spark. Apparently that spark wasn't quite enough for them to get engaged, which means fans will get to enjoy an entire season of Rachel continuing to search for love. The fact that she's going to lead the upcoming season makes it clear that things didn't work out with her and Nick, so what does Nick think about Rachel as The Bachelorette?

Nick was nothing short of thrilled for his one-time love interest. While their relationship might not have worked out, there were definitely no hard feelings between Nick and Rachel. Some fans may be surprised that they didn't end up together based on how well their relationship was going on The Bachelor, but it seemed to have ended well enough that Nick couldn't wait to see what the future holds for Rachel. During an interview on The Ellen Degeneres Show, Nick commented on her new opportunity by saying, "Rachel and I had an amazing amount of chemistry from the very first night. I'm very excited for her. I think she's going to be an amazing Bachelorette."

In addition to his comments during the interview, Nick showed his support for Rachel on Twitter. He was effusive in his praise for her, and made it obvious that he was more than happy for her. Rachel's turn on The Bachelorette will be groundbreaking because she'll be the first black woman to lead a season of the show, and that was something else Nick congratulated her on. He might be more excited for Rachel to be the next Bachelorette than she is.

Just kidding! Interviews made it obvious that Rachel was incredibly eager to start the second half of her journey with the franchise. When appearing on Jimmy Kimmel Live to talk about the announcement, Rachel said she was looking for something serious – and prepared to start looking ASAP. "I'm ready to get this thing started," she said. "I'm ready to find love – my husband! If you know anybody who needs to apply, sign up! Go ahead and get started!"

With so many fans – and co-stars, apparently – who can't wait to see Rachel take on a lead role, her season of The Bachelorette can't come quickly enough.