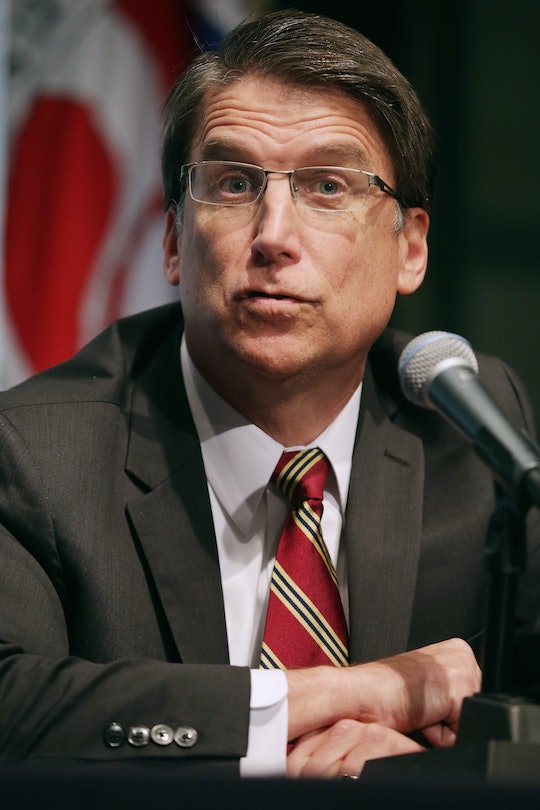 What Does North Carolina’s HB2 Lawsuit Mean? The Governor Says It's Been Misinterpreted

North Carolina's House Bill 2 (HB2) has been one of the most controversial pieces of legislation in recent months. Nicknamed the "bathroom bill," it requires transgender people to use the restroom that corresponds to the sex on their birth certificate, rather than their self-identified gender. Following the federal government's pronouncement that HB2 violates constitutional rights, North Carolina Gov. Pat McCrory filed suit against the Department of Justice. His administration is asking federal courts to reexamine and "remedy" that ruling. So, what does North Carolina's HB2 lawsuit mean for the law and similar ones around the country? The lawsuit will decide HB2's fate.

The Department of Justice gave the North Carolina state government a strict deadline to respond to its ruling, and it's quickly approaching; in fact, it's Monday afternoon. But, according to NPR, North Carolina was never planning on meeting that deadline. State House Speaker Tim Moore said it "will come and go." He also said, "We're going to move at the speed we're going to move at." That was definitely proven during the special session lawmakers called to ratify HB2, which took a mere 12 hours to pass. It's reversal, unfortunately, is predicted to take much longer and cost the state much more.

While the lawsuit against the DOJ is brash, it's hardly surprising. The alternative is McCrory and HB2 supporters admitting that they were wrong. It's much easier, it seems, to continue to support a wildly unpopular state law. The issue across the country has been a polarizing one. On the one hand, it seems like a clear act of LGBT discrimination. Proponents of the bill are calling it a "common sense" safety measure, even though there are no studies that show that predators exploit LGBT-friendly bathroom legislation to commit crimes. The state has suffered economically because of the administration's stance.

In a statement about the lawsuit, McCrory said, according to The News & Observer:

The Obama administration is bypassing Congress by attempting to rewrite the law and set restroom policies for public and private employers across the country, not just North Carolina. This is now a national issue that applies to every state and it needs to be resolved at the federal level. ... I think it's time for the U.S. Congress to bring clarity to our national anti-discrimination provisions.

The DOJ said that the law violates the Civil Rights Act and Title IX. McCrory claims that is a "radical reinterpretation" of those mandates and that the ruling was a "baseless and blatant overreach." The state's lawsuit against the DOJ definitely means more publicity and posturing for the North Carolina state government, but it could also mean an opportunity for the federal government to pronounce any anti-LGBT legislation (especially when it's done in response to non-discrimination ordinances) illegal from now on. The ideal outcome for this lawsuit would be a reversal of HB2, more bad press for McCrory, and strengthened protections for all LGBT people across the United States. That, however, remains to be seen.