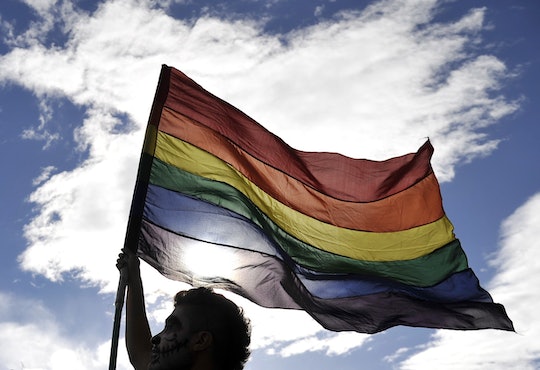 What Does North Carolina’s New Non-Discrimination Ban Mean For LGBT People? It's A Step Backward

On Wednesday, Republican leaders in the North Carolina General Assembly passed a bill to repeal all local LGBT nondiscrimination ordinances, effectively undoing any progress rights activists have achieved in the state. So, what does North Carolina's new non-discrimination ban mean for LGBT people?

The amazing thing about this turn of events is that it all happened within a span of a day. In an time marked by political gridlock, this bill, that effectively bans LGBT people from restrooms that correspond with their gender identity, was put to the floor and passed within 10 hours. Gov. Pat McCrory signed the bill late Wednesday night and sent out a press release on his decision shortly thereafter. He wrote:

This radical breach of trust and security under the false argument of equal access not only impacts the citizens of Charlotte but people who come to Charlotte to work, visit or play. This new government regulation defies common sense and basic community norms by allowing, for example, a man to use a woman's bathroom, shower or locker room.

What he's referring to in Charlotte is an ordinance designed to protect LGBT people from discrimination in public facilities, accommodations, and housing. It was set to go into effect April 1. McCrory defended his decision to override this ordinance by saying, “The basic expectation of privacy in the most personal of settings, a restroom or locker room, for each gender was violated by government overreach and intrusion by the mayor and city council of Charlotte."

When the ban went to the GOP-dominated Senate, it passed unanimously because every Democratic senator present walked out in protest. It passed in the House 83-25 on Wednesday. But what does this mean for LGBT people across the state and country? Unfortunately, the effects extend well beyond the city line of Charlotte, North Carolina. It not only sets a precedent for state law to overrule city law; it overrules all local ordinances, like Charlotte's, that seek LGBT equality in employment, wages, public spaces, and housing.

The issue that brought the ban to popularity was allowing transgender people to choose the bathroom that matches their identity. Republican opponents used fear mongering tactics to underscore what they saw as a threat to the safety and privacy of women's restrooms. None of these threats are based in facts, though, according to a widespread analysis conducted by Media Matters. The result is that transgender students will not longer be able to choose their school restroom and will be forced to use the restroom that corresponds with their gender at birth.

The move by the state legislature is the first step toward a battle with the federal government, which has been explicit about protecting LGBT rights. Already, the American Civil Liberties Union is preparing to challenge the decision. They claim that McCrory's decision goes directly against the Department of Education's rulings that ban transgender discrimination.

On the other hand, the Alliance Defending Freedom, a religious legal group, applauded the ban. In a statement, Legal Counsel Kelly Fiedorek said, “We commend the General Assembly for listening to the voices of thousands of North Carolinians and taking the common-sense action of ensuring that no women or young girls are forced to undress, shower, or engage in other private activities in the presence of men." It is becoming increasingly clear that this fight is far from over.