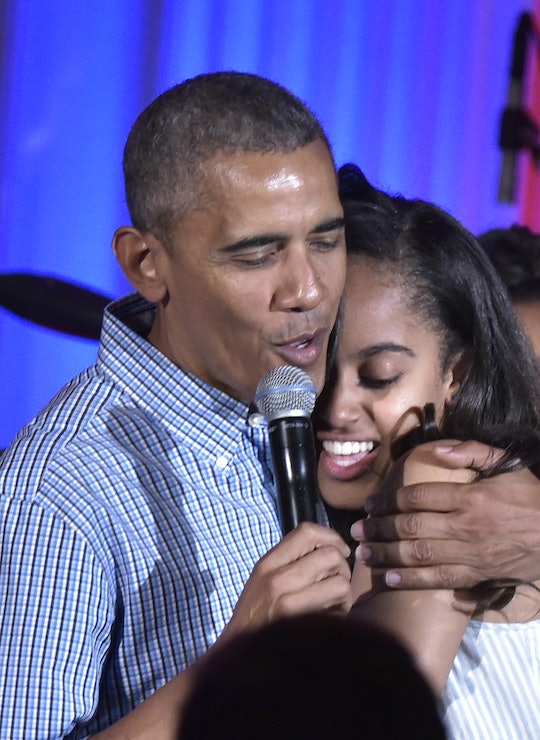 What Does Obama Think About Malia Smoking? Is It Really Anyone's Business?

Everyone, the sky has officially fallen: A video of Malia Obama at Lollapalooza has been circulating the internet recently and in it the first daughter appears to be hitting the tail end of a joint with a group of friends. I would pay hard cash to be a fly in the White House residence and find out what Obama thinks about Malia smoking. The President wrote in his own memoir that he definitely used to smoke pot now and again and "maybe a little blow." Later, in 2006, when asked if he inhaled, Obama answered like a true human. "That was the point," he said. (Which is a huge difference from when President Bill Clinton admitted in 1992 that he smoked pot, but "didn't inhale," which anyone who has ever smoked anything knows is complete BS.)

So it's pretty safe to assume that Obama and the First Lady didn't ground Malia (if the girl in the video is really her and if it is in fact a joint and not a rolled cigarette, which is something hipsters do these days) for the act of partaking in a little puff-puff-pass. But if I had $100 (I don't, so don't hold me to this), I would bet she got a straight talking to about being a little more aware of her surroundings and the jerks who are recording her to post their spoils on the internet later.

Her father has enough to put up with and the only irresponsible thing she did was do it in clear view of a camera. Other than that, though? I don't see a problem. Let me explain.

On social media, haters are talking about the Obama daughter smoking "illicit drugs," as if she were breaking the law. She was not. Or, not really. The state of Indiana has begun decriminalizing marijuana. Unless she was carrying more than nine grams or intended to sell that joint, Malia didn't break any laws. Also, whether one likes it or not, marijuana is eventually going to be legalized and taxed. The herb's benign effects on the body and mind, along with the cost benefit for the country of decriminalizing weed, makes it inevitable. Sure, more research should be done about the long-term effect of weed on, say, a 12-year old's brain, before the country starts making laws. But all in all, Malia didn't seem to be doing anything "illicit."

Another one of the complaints from Obama-haters is that Malia hitting a joint just isn't "presidential." Well, news flash: Malia isn't the president (yet). She is an 18-year-old who grew up in the White House. She was also caught getting down at Lollapalooza last month (the video seems to be taken the same day, which might explain the sudden bravery of hiking her skirt up) when she "should have been" at the DNC with her family. I would like to give a big high-five to the Obamas for not pressing that issue. Malia doesn't need to help get a Democrat elected. She needs to be a young woman, readying herself to for Harvard University during her "gap year."

The real news flash here is Malia Obama seems to be just like her father: highly driven and also pretty cool. Instead of tightening the noose around a woman in the public eye to be "proper," possibly leading to depression and anxiety common in children of celebrities, the Obamas seem to be giving Malia the proper space to grow into herself. Again, it's not a crime, it's not putting her health on the line. Dancing in a crop top and smoking weed is what 18 year olds do at Lollapalooza.

The stone throwing at the president's daughter has this nasty undertone of sexism and a little bit of racism tied into it. If anything, I only hope Malia's own friends aren't taking those pictures and videos of her and she is able to find a solid group of humans who respect and take care of her in the public eye. Also, seriously, someone should give Malia the first hit and not the nasty little burnt out end if we want to make it seem like she's a privileged brat.

Americans should be more concerned about a lot of other things than an 18-year-old hitting a joint. It's pretty likely that her parents are, anyway.