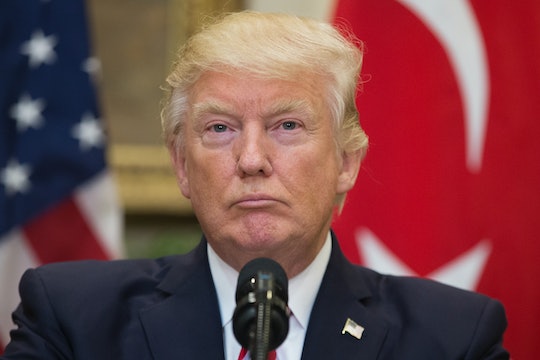 Some Think Trump Is Guilty Of Obstruction Of Justice

At times, it's hard to keep up with the controversies coming out of the White House. Now, the latest on President Donald Trump's firing of former FBI Director James Comey has pundits and critics buzzing about obstruction of justice. But what does obstruction of justice mean, and is Trump actually guilty of it? With Tuesday's news of a previously-unknown memo from Comey detailing new allegations, the president's actions don't exactly look good.

Obstruction of justice is officially, and somewhat broadly, defined in the 18 US Code Section 1512 legal statute as an offense where someone "obstructs, influences, or impedes any official proceeding, or attempts to do so" in order to stop the administration of justice. So, for example, it's illegal for a person to interfere with a witness, to hide or destroy evidence, or to bribe an investigator. It's also illegal for a person to try to do those sorts of things, even if they don't work, as long as the intent was there.

The question in Trump's case seems to be whether the intent behind his controversial firing of Comey was to allegedly obstruct the investigation that Comey was leading into possible collusion between Russia and members of the Trump campaign during the 2016 election. Romper reached out to the FBI and the White House for comment, but did not immediately hear back.

The president is legally allowed to fire the FBI director. However, given that Trump contradicted the official White House reasoning behind the firing (that it had to do with how Comey handled Hillary Clinton's email investigation) and said publicly during an NBC News interview that he was thinking of "this Russia thing" when he made his decision, some prominent legal experts began to weigh in, saying that the president's actions could constitute obstruction of justice.

And since that interview, more reports of Trump allegedly attempting to reportedly interfere with Comey's investigation have come to light. On Tuesday, The New York Times published a story which claimed that Comey wrote a memo shortly after meeting with Trump back in February. In the notes from the meeting, Comey reportedly detailed that the president had asked him to stop the federal investigation into Trump's former national security adviser, Michael Flynn. According to the Times report, Trump said to Comey, "I hope you can see your way clear to letting this go, to letting Flynn go. He is a good guy. I hope you can let this go." (Comey reportedly only responded by agreeing that Flynn was "a good guy.")

If this report is true (at the moment it is, admittedly, just a report), it certainly sounds like someone attempting to interfere with an investigation, especially given the power dynamic at play, and what happened to Comey when he did not, in fact, let it go.

The White House gave a statement to The New York Times in response to the memo allegations on Tuesday, saying,

We'll have to wait and see what Trump has to say about it the next time he gives an interview or turns to Twitter.