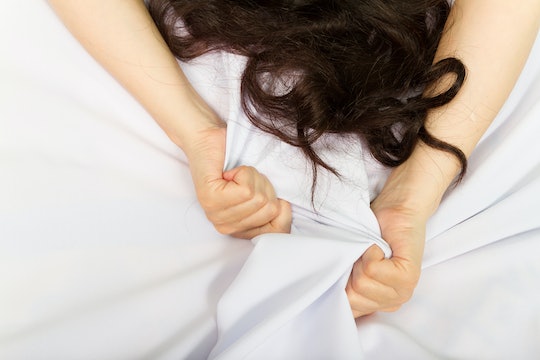 How Orgasms Feel After A Vaginal Birth

Just because you become a parent, doesn't mean you have to give up all hopes of intimacy, sex, and the big O. Your pleasure is still important, although it might be taking a temporary backseat while you tend to thousands of daily diaper changes. However you prioritize sex on your postpartum to-do list, just know that it will probably feel different than what you were used to pre-baby. That's OK and totally fine. Different doesn't automatically mean bad; it can actually mean better. So what does an orgasm feel like for a woman who had a vaginal birth? Turns out there are two distinct ways it can go.

The first, and worse case scenario, is that it's not happening at all. It sucks, but know you're not alone. According to the Baby Center, it's normal to have decreased sex drive after birth and you can thank tanking hormones and extreme fatigue for this. That means you won't arouse easily, your vagina might be dry, and orgasms may be unlikely. Additionally, if you had a traumatic vaginal birth experience and perhaps had to have stitches down there, intercourse may be really painful.

The opposite end of the spectrum is that the sex could be off the charts. I know, complete opposites. It's not talked about as much, and science hasn't totally explained this, but some women report having more intense orgasms. "One possibility is that the nerves that provide sensation to the pelvis get traumatized during delivery," OB-GYN Dr. Kelly M. Kasper told SELF. "Women will often say the first week or two after delivery, they feel less [in that area]. But as those nerves recover, they could be hyper-sensitive."

As for whether or not your vagina will ever be the same again, most experts say no. Your vagina will stretch during pregnancy and child birth and the extent to which it expands has to do with genetics and how big the baby is, as noted by What To Expect. As much as a vagina can expand, it can also remarkably recoil, although possibly not into the same shape, form, or maybe even tightness as before.

That's where pelvic floor exercises come in as they've been proven to help with incontinence and uterine sagging, according to Web MD. The bonus is that they can help with orgasms. Emily Morse, founder of the app Kegel Camp, told Women's Health that kegels can strengthen vaginal muscles and boost arousal before and during sex.