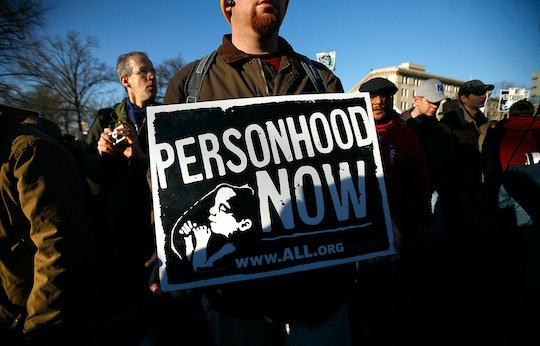 The "Personhood" Debate Is Back In The Spotlight

There is a new bill in the nation's capital that is getting a lot of attention for all the wrong reasons. H.R. 586 is a conservative-backed bill that would threaten the rights of women for years to come, if passed. The bill is defined as a "personhood" bill — as the bill details when a "person" earns their rights. But what does "personhood" mean and how can it be defined by Congress?

H.R. 586, first introduced in the House on Tues. Jan 17, is sponsored by Georgia Republican Rep. Jody Hice, and is formally called the "Sanctity of Human Life Act." The bill, as defined by congress.gov, declares that every person deserves the right to life and that states have the rights to protect lives. But even further, it defines what a person is — stating "each human life begins with fertilization, cloning, or its equivalent, at which time every human has all the legal and constitutional attributes of personhood."

So if a human life begins at fertilization — then what is this personhood that they're legally obligated to have? From the standpoint of a basic definition, according to the dictionary.com, personhood is defined as "the state of being a person" or "the state of being an individual or having human characteristics and feelings." Legislators define personhood more or less the same way. So does H.R. 586 tick all those boxes? Not really.

According to Rewire, personhood laws seek to classify fertilized eggs, embryos, and fetuses as "persons" — which grants them "full legal protection" under the constitution. Personhood basically guarantees these eggs the right to life and their rights the moment they're fertilized. By granting these things personhood, it ultimately could criminalize abortion, and, according to Rewire, could, in more severe terms, ban in vitro fertilization.

According to NPR, if fertilized eggs were to be granted personhood it would be bad news for women everywhere. "You could essentially have every pregnant woman subject to a person who is entitled to her medical records," NPR explained, "who is entitled to require her to undergo whatever medical procedure is best for her, have her arrested if she doesn't obey."

H.R. 586 has 20 co-sponsors — but will have to be passed by House and Senate and signed into law by President Trump to officially grant embryos and fetuses "personhood." For now, critics and supporters will both have to wait and see what happens.