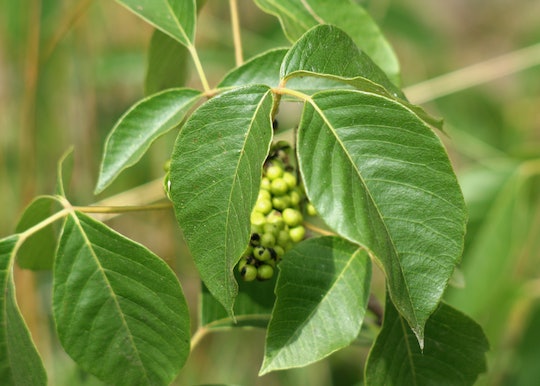 Here's What Poison Ivy Looks Like In Plant & Rash Form

I'm preparing for a few family vacations, and both trips will include numerous jaunts into the wilderness for hiking, biking, trail riding, and whatever else people who don't live in New York City do in the outdoors. Living in Brooklyn hasn't exactly prepared me for the rigors and risks of such adventuring, but I'm determined to find out, if only to protect my children and avoid disaster. There is a lot you don't learn when you grow up here, like which plants to avoid. So for the sake of my skin, what does poison ivy look like?

There's an old saying — "leaves of three, leave them be" — which is a safe bet when trying to determine whether or not what you've encountered is poison ivy or not. According to the University of Maryland College of Agriculture and Natural Resources, poison ivy has what is referred to as "compound leaves," which means that each leaf is actually a cluster of three little leaflets. They hold the traditional ivy shape of a bow-less heart, and can be green, gold-ish green, or even have a bronze or red hue to the leaves. Poison ivy also has a distinctly hairy stem attached to the older leaves, where the younger leaves have hairless stems that snake from them and are nearly invisible unless you're really looking.

So what does poison ivy look like when its flowered? The flowers, according to the University of Michigan, are tiny clusters of miniature white flowers that grow closely beneath the compound leaves of the plant. The flowers have a bright orange center. So you know, the perfect thing for your kid to pick up and give you in a Mother's Day bouquet.

But as it turns out, only three quarters of the general population are allergic to poison ivy, according to researchers at Penn State University. They found that some of us only experience a mild reaction, and some, like me, experience nothing at all. I've since come in contact with poison oak and poison sumac, and those are also duds. However, I'm allergic to every metal under the sun, so I guess it's all balanced.

But for those who do have a reaction, it's from the oil of the plant. The oil that causes the rash that's found in poison ivy is called "urushiol," according to the American Academy of Dermatology. This oil causes the skin to breakout over a period of about 72 hours and is not contagious. It also doesn't spread, even if it looks like it does. That's just the oil working its magic and blooming into the blistery rash over a period of time. The rash, according to The Mayo Clinic, might look like a straight line or welt thanks to the way you brush up against the leaves. It can blister or look like angry red bumps just beneath the skin. It might even look like you've been hit with a bramble bush, and it will get worse before it gets better.

Thankfully, researchers noted that it usually goes away within two weeks. The Mayo Clinic also wrote that it can be treated with cool baths and calamine lotion, as well as ice packs to the affected area. If the rash gets really bad, a doctor may prescribe steroids to clear it up more quickly.

Funny thing, not everyone is allergic to poison ivy. Neither my husband nor I are allergic to the plant. I could literally wipe my butt with poison ivy and nothing would occur. I know this because before I knew better, I had a bathroom "emergency" at the Wilmot Wilderness Center in Ohio while on a nature walk with my grandmother. She sent me off to to my business in the bush, and when she tried to hand me a napkin to clean up, I said "I already used one of those!" I pointed to a bush I'd chosen because the leaves were pretty, and so were the flowers beneath the cluster. She was shocked to discover that her 7-year-old granddaughter had used poison ivy as her toilet paper of choice, and was very quick to rush me home where I'm sure she thought she'd be treating my angry red bum with lotion, only to discover that nothing happened.

If you see leaves of three, please for the love of all that is holy, leave them be. Because even though some of us aren't allergic, that's really not a game of roulette that you want to play.