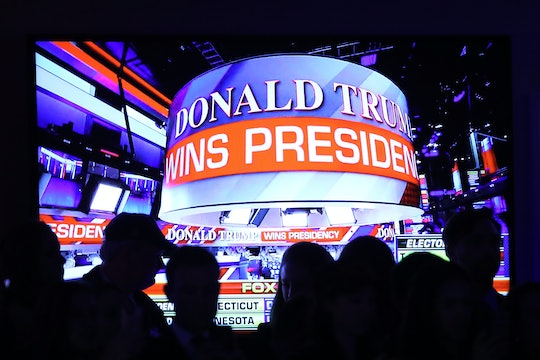 What Does President-Elect Mean? Donald Trump's Victory Has Many Wondering

Essentially, it's a nice way of saying "This person just won the presidency, but there's still someone in office... and we can't kick them out yet... soooo...." Until the sitting president leaves the White House in the year following the election, the newly-minted president has to sort of hang around in the wings, awaiting inauguration. Of course, they can't call them "candidate" anymore, since they've won the election fair and square. "President-elect" gives the winner something of an official title until the current presidential title is vacated.

In Trump's case, the date that President Obama will officially and finally pass down the mantle of "president" falls on Friday, Jan. 20 — the date of the 2017 inauguration when Trump will be sworn in before the entire country. After that point, Trump becomes "President Donald J. Trump," "President Trump," or maybe "President Donny" if you're casual with him like that — but no longer just "The Donald." (Sorry, Clinton supporters.)

"We will get along with all other nations willing to get along with us," Trump said in his victory speech on Wednesday morning, laying out his plan for his post-Jan. 20 tenure. "We will deal fairly with everyone. We will seek common ground, partnership not conflict. America will no longer settle for anything less than the best. We must reclaim our destiny."

Of course, not everyone is thrilled about Trump taking over that role, come January. "From the moment he announced his candidacy, Donald Trump ran a campaign of white supremacy and white pride. In fact, his true entry into presidential politics predated his bigoted, anti-immigrant announcement speech that he delivered in the summer of 2015," The New York Daily News' Shaun King lamented in a column early Wednesday morning. "... Yes, Hillary was flawed, but no candidate was more flawed than Trump. He was simply willing to appeal to the very worst instincts of our country and it worked. I have long since believed that the United States is deeply racist at its core. This election has confirmed it."

However you feel about the Republican victor at the moment, one thing is certain: Everyone should start getting used to saying "President-elect Donald Trump," rather than "GOP candidate Donald Trump." Just not for too long.