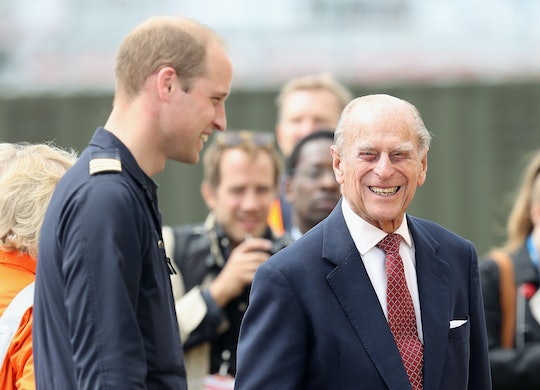 Prince Philip Is Stepping Down, But What Does Prince William Think?

Prince Philip's retirement will not go into effect immediately, according to the BBC. The 95-year-old prince will fulfill his social obligations until the beginning of August, at which time he will no longer accept invitations. The decision to step down, according to a Buckingham Palace spokesperson, was made by Prince Philip himself, although (as previously mentioned) he does have the full support and backing of Queen Elizabeth II.

An official statement was released by Buckingham Palace after the decision was made, reading:

So, what does this mean for Prince William? While the public has yet to hear from the Prince himself, a look into his 2017 public engagements thus far may give some insight into what the he thinks about this Royal Family change, and what it might mean for his future.

According to the BBC, the 34-year-old Prince has attended royal engagements on 12 days in 2017, including "a trip to south Wales, a gala dinner, and an investiture at Buckingham Palace." The Duke of Cambridge splits his time between royal duties, a part-time job as a pilot, and his charitable work, so while that number might seem low, he has multiple responsibilities he juggles simultaneously (including being a father to 4-year-old Prince William and 2-year-old Princess Charlotte).

In January of this year, however, Prince William announced that he was leaving his air ambulance job in the summer to "increasingly base" his family in London and take on more Royal responsibilities, according to the BBC. The decision came after Queen Elizabeth stepped down as patron of 25 charitable organizations, passing many of them down to Prince William.

How Prince Philip's decision will ultimately impact the Royal Family going forward, of course, remains to be seen. However, given the small shift in power seen over the last year, it is easy to assume that Prince William will continue to handle more Royal Family responsibilities.

More Like This
Kate Middleton Once Gave Prince William A Nickname That'll Make You Clutch Your Pearls
Netflix Reveals The Official Teaser Trailer for Wednesday
What Parents Need To Know About Marvel's New She-Hulk Series Coming To Disney+
Kristin Bell Shared Some Sweet, Rare Photos Of Her Daughters From A Family Vacation