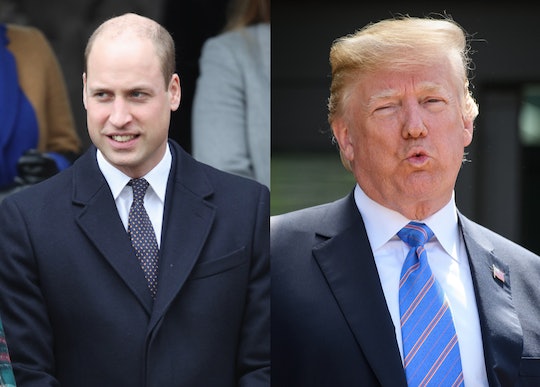 Being a member of the British royal family mostly seems like an exercise in following protocol and staying as far away from controversy as possible — particularly if you are expected to take the throne during your lifetime. But given that royals are also often expected to meet with various heads of state, walking the fine line of good-natured neutrality can be tricky when someone as polarizing as President Donald Trump is in the White House. What does Prince William think of Trump? As the man currently third in line to be king, it's no surprise that he hasn't exactly been jumping to share his opinion on the POTUS, for better or for worse. But there are a number of clues that seem to suggest Prince William probably won't be seen sporting a MAGA hat anytime soon.

Trump has yet to actually meet with Queen Elizabeth II, but it sounds like that will soon change: in April, the White House confirmed that Trump will visit the UK on July 13, according to The Express, during which time he, and his wife, Melania, are expected to meet with the monarch. That's not exactly surprising — in 2009, President Barack Obama and Michelle Obama met the Queen for the first time about a year after taking office, according to Hello!, and were later hosted by the royals at Buckingham Palace in 2011, and at Windsor Castle in 2016. But while the Obamas appeared to have formed a rather close relationship with various members of the royal family, Trump might not want to get his hopes up about doing the same.

For one, well, he doesn't exactly seem to be a bit hit among the British people. In early 2017, nearly two million people signed a petition in hopes of barring Trump from meeting the monarch during any state visits to England, arguing that "it would cause embarrassment to Her Majesty the Queen." Yet British parliament responded that, when Prime Minister Theresa May originally invited Trump to visit the United Kingdom, she was ultimately doing so "on behalf of Her Majesty the Queen," and given that the Queen is required to remain politically neutral, there's no reason to expect that the petition would be honored.

It's not expressly known whether Prince William will also be expected to meet with Trump during his July visit, but if he does, it's reasonable to expect he'll remain just as cordial and polite as the Queen herself will almost certainly be. But that doesn't exactly mean he'll approve.

It's definitely no secret that Trump has always been a fan of making some seriously insensitive and straight-up offensive remarks, specifically about women. But if that wasn't enough to leave Prince William feeling uncomfortable in general, the fact that Trump has previously gone on record speaking about hitting on the prince's late mother, Princess Diana, definitely seems like it would prevent a Trump-Prince William bromance.

In 2015, British TV anchor Selina Scott claimed that, following Princess Diana's divorce from Prince Charles in the early '90s, Trump pursued the newly-single royal by sending "huge bouquets" of flowers to her home at Kensington Palace, according to People. Scott believed that the future POTUS saw the princess as "the ultimate trophy wife," and said that Diana had once told her that Trump "[gave her] the creeps." Later, in his 1997 book, The Art of the Comeback, Trump said his only "regret in the women department" is that he'd never had the chance to "court" the royal, but, in a later interview with Howard Stern, Trump was much less polite. When Stern asked Trump if he "could've nailed her," according to Town & Country, Trump replied, "I think I could've."

He Blamed The Duchess Of Cambridge For Unauthorized Paparazzi Photos

Then, there's the fact that Trump has previously tweeted comments criticizing Prince William's wife, Catherine, the Duchess of Cambridge. In Sept. 2012, a French court awarded the royal couple more than $100,000 in damages after they sued a magazine for publishing unauthorized long-lens photos taken by paparazzi photographers of the Duchess sunbathing topless while on vacation at a private residence in the south of France, according to The Guardian. The couple's legal team argued that the photos had been an "unjustified intrusion," and in a letter, Prince William wrote that the existence of the photos felt "particularly shocking" as it reminded him "the harassment that led to the death of [his] mother, Diana, Princess of Wales."

The court clearly appeared to agree, but one person who didn't? Trump. In a 2012 tweet, the now-POTUS said that the duchess had "only herself to blame" for the photos, and followed up by writing, "Who wouldn't take Kate's picture and make lots of money if she does the nude sunbathing thing. Come on Kate!"

Prince William Is A Supporter Of Wildlife Conservation

Just in case that weren't already enough to make a pretty good case for why Prince William probably doesn't think too highly of Trump, there's also the fact that they certainly don't seem to see eye-to-eye on one issue that seems particularly important to the prince: wildlife conservation. Prince William (as well as his father, Prince Charles) has long been a vocal supporter of fighting the illegal wildlife trade, including poaching — something Obama praised the prince for during his visit to the White House in Dec. 2014, according to NBC News.

Trump's take on wildlife conservation? In March, the Associated Press noted that the president's wildlife advisory board was "stacked with trophy hunters," and, of course, Trump's own sons have been photographed on hunting trips in Africa — one photo from 2011 showed Donald Trump Jr. in Zimbabwe holding a bloody knife and a severed elephant tail.

Still, so far Prince William has remained mum on Trump, at least publicly, but it doesn't seem like too much of a stretch to assume that, in addition to his view on wildlife, he may also share Prince Charles' perspective on things like climate change and politics, which would put him in direct opposition to the POTUS' policies.

In Dec. 2016, for example, the elder prince recorded a message for BBC Radio 4's Thought For The Day, according to The Independent, and warned about the "rise of populism," in what seemed to be a not-so-subtle dig at Trump's presidential win — and his unfavorable view of Muslims and refugees. Prince Charles said,

The suffering doesn’t end when they arrive seeking refuge in a foreign land. We are now seeing the rise of many populist groups across the world that are increasingly aggressive towards those who adhere to a minority faith. All of this has deeply disturbing echoes of the dark days of the 1930s. My parents’ generation fought and died in a battle against intolerance, monstrous extremism and inhuman attempts to exterminate the Jewish population of Europe.

What's more is that the Prince of Wales is also a strong supporter of the environment, according to BBC News, and regularly speaks out about the need to make tackling climate change a priority. Trump, on the other hand, couldn't possibly hold a more differing opinion: his view is that climate change is a hoax.

In other words? Well, I probably wouldn't put any money on expecting to see photos of an Obama-style meeting between Trump and Prince George, nor does it seem like Prince William will be going out of his way to spend time with the president unless his royal duties require him to. But it also isn't particularly surprising that the future king has refrained from passing any public judgment on Trump. Like his grandmother, the Queen, Prince William seems to be much more comfortable remaining as neutral as possible when it comes to politics.