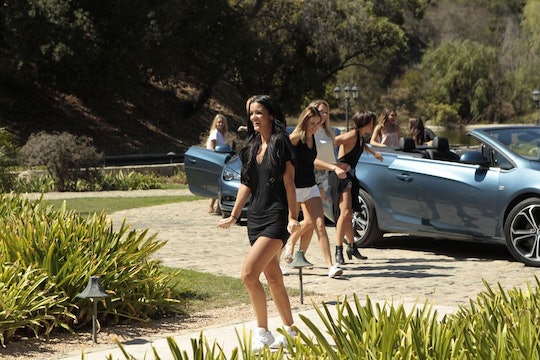 Raven's Ex Is Probably Not A 'Bachelor' Fan

When Nick Viall took all the women back to his hometown on The Bachelor, some interesting information about the past came to light, but it wasn't Nick's past being discussed. During a lengthy one-on-one date, Raven finally got a chance to let Nick (and the audience) get to know her. She played soccer alongside his little sister Bella, had a meet-and-greet with the Viall parents, and enjoyed some time at the roller rink. The date concluded with a romantic dinner in an empty museum, which was where Raven described — in graphic detail — the cheating scandal that ended her last relationship. But how does her ex feel about being called out on national television? What does Raven's ex-boyfriend think about The Bachelor?

Raven's ex-boyfriend is named Hunter Henry, according to Wetpaint, and so far he seems to be keeping quiet about the entire situation. He's currently working as a doctor in Arkansas, where Raven is from and where the entire cheating debacle took place. He hasn't commented on the situation on his social media accounts because he doesn't seem to have much of a social media presence at all: searching for him only turns up another Arkansas native named Hunter Henry who plays football.

There's no way to know if Henry even watches The Bachelor, but if he does then it seems fair to assume that he's probably not thrilled by Raven's tale of their breakup. It's not a story that painted him in a flattering light, though Raven didn't come out of it looking all that great either. As Raven explained to Nick, she walked in on Henry and another woman in the act and basically lost it, even picking up a stiletto to hit him with. While cheating on someone is obviously awful, it's also a bad idea to resort to physical violence when dealing with it. Use your words, Raven, not your shoes!

However, even though the story was fairly damning, without an official comment from Henry it's impossible to know for sure how he feels about the entire thing. But Henry might not have even gotten a chance to see Raven telling the story: apparently that part of the episode didn't air in central Arkansas. Raven tweeted that it had been "censored," but Mark Rose, the general manager of the KATV station that cut the scene, insisted it was simply a case of technical difficulties. A commercial break was accidentally aired at the wrong time, cutting off Raven's story and only returning once she was done telling it.

It seems like an oddly specific error, which led some to speculate that the station was being protective of their local doctor Hunter Henry, but Rose promised it was an honest mistake. Maybe fate was simply intervening to shield Henry from the bad memories. I guess we'll never know for sure.