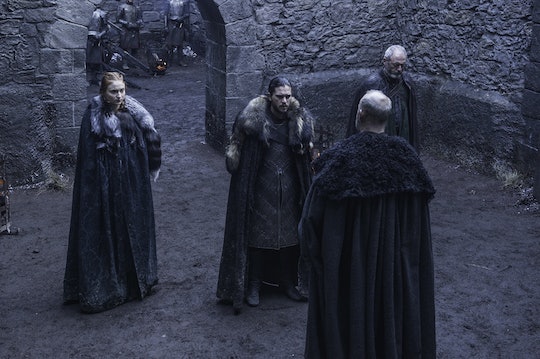 What Does Sansa’s Letter Say? 'Game Of Thrones' Is Gearing Up For Its Biggest Battle

During Episode 7 of Season 6, we find Game of Thrones' most unlikely trio — Sansa, Jon, and Ser Davos — headed further South to form a formidable army to take on Ramsay and the rest of House Bolton to regain Winterfell and the North. But as the odds stack up against them, Sansa eyes a raven and sends a letter off to (most likely) try to enlist more support from other houses loyal to the Stark family. But what does Sansa's letter say, and who did she send it off to? And why does she send it behind Jon's back?

Disappointed and frustrated that more houses haven't come forward to willingly and happily pledge men to fight for House Stark, Sansa and Jon find themselves with a mismatched army made up of more than 2,000 Wildings, 62 Mormont men (62!), and a handful of men from other, smaller houses. Sansa's overwhelming need to take back the North from a man who brutalized her, raped her, and tortured her for sport is totally understandable, and I can't blame her for calling into question Jon's leadership, his advisors, and his game plan. Season 6 Sansa is an all-new Sansa. And I'm here for it. I love the badass, give-no-f*cks side of her character, but I'm dying to know who she sent the letter off to under the cover of secrecy.

The one big tell from the scene is when Sansa signs the letter "Stark" and uses her family's house seal. It's obvious her letter is an appeal to another northern family, likely one with ample, strong, and available men (and supplies). Perhaps it's addressed to the Karstarks or the Umbers, since those are two houses we've heard plenty about as of late. If Sansa's letter is to the Umbers, it could put to rest whether or not Rickon's kidnapping is part of a larger conspiracy (one that would include Shaggydog not being dead) to fool the Boltons and eventually regain Winterfell. But if we're wrong, and House Umber is loyal to House Bolton, Sansa's appeal could bode deadly for Jon, Sansa, Ser Davos, Brienne, Rickon, and everyone involved. And against a psychopath like Ramsay Bolton, that's a terrifying possibility to consider.

If it's an appeal to the Karstarks, that could be interesting as well. Given their long, complicated history (Robb beheaded a Karstark and that set off a deadly chain of events for everyone involved), it'd be interesting if the Karstarks pledged themselves loyal to the Stark name. However, it's not totally impossible.

But more than anything, I'm hoping that Sansa's appeal for help to regain the North works in their favor. Perhaps her appeal is addressed to Littlefinger. It wouldn't be the first time she worked alongside him without Jon's knowledge, and given the fact that he'd move mountains to help her, maybe Littlefinger is the guy to have on your side right now.