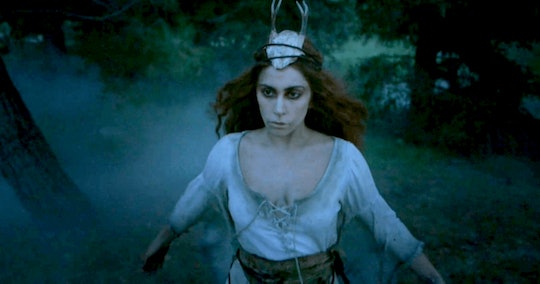 What Does Scathach Mean On 'American Horror Story: Roanoke'? It's A Gaelic Name

She's been around since the second episode of the season, but Lady Gaga's American Horror Story: Roanoke character only got a name on the most recent installment, "Chapter Four." That name, given via closed captioning (but not spoken by any of the characters, so good luck with pronunciation!), is Scáthach. It's a very distinctive name and was obviously not chosen randomly – Scáthach is a Gaelic word and relates to a figure in the Ulster cycle of Irish mythology. But what does Scáthach mean on American Horror Story: Roanoke?

We were intrigued by Lady Gaga's mysterious character ever since Shelby stumbled upon her (and the other Roanoke colonist ghosts) in the woods at the beginning of "Chapter 2." While we continued to learn plenty about the Butcher and her backstory as a mortal leader of the Roanoke colony back in the 1500s, we knew almost nothing about the forest witch we now know to be called Scáthach – until "Chapter 4," anyway.

In the October 5 episode, we learned that Scáthach was once a (presumably) normal, human Englishwoman, descended from the druids and their Roman conquerors. She once worshipped the "Old Gods," and, after being imprisoned upon arriving in America as the sole survivor on a ship full of death, she slaughtered her captors in answer to "the call of more ancient and bloodthirsty gods."

Who or what those "more ancient" gods are, we still have no idea. That seems to be the M.O. this season – introducing answers to existing questions that give rise to brand new, more complicated questions.

Though we now know her history, we still don't really have a clear idea of *what* she is. All we know is that, according to what she told Matt of her history during one of their illicit enchanted sex-romps, "the old magic and New World created something new" – that "something new" being Scáthach. But what, precisely, that "something" is – witch, demon, goddess or "other"? Your guess is as good as mine.

One thing we do know for sure is the definition of "Scáthach." According to the Encyclopedia Brittanica, Scáthach means "the shadowy one" in Gaelic – which is, obviously, incredibly fitting, given what we know and what we've seen of Gaga's creepy, woods-dwelling character. But beyond "the shadowy one," Scáthach has great significance as a mythological figure.

Also known as "Skatha" or "Sgathach," the figure in Irish legend was a warrior-maiden who lived in the fortress Dún Scáith (Castle of Shadows), thought to be on the modern-day Isle of Skye, and taught a variety of legendary mythological warriors in the art of war. Because Scáthach already clarified that she was descended from the Druids, it's likely that "Scáthach" was actually her given name at birth and that she was simply named after a renowned mythological figure by her (human) parents.

In any case, the mythological significance of her name definitely can't be ignored – as dearly-departed Cricket said, Scáthach is "the bitch with the real power" and will likely be a force to be reckoned with.