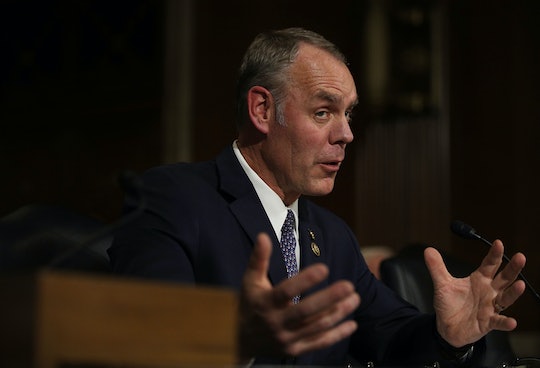 What Does Secretary Of The Interior Do?

On Wednesday, the U.S. Senate confirmed Montana Rep. Ryan Zinke as the new Secretary of the Interior. Zinke, as one of President Trump's Cabinet nominations, was one who flew largely under the radar compared to more controversial Cabinet pics such as Betsy DeVos as education secretary, and former Sen. Jeff Sessions as attorney general. Zinke was confirmed by a wide margin in the Senate, in a vote of 69 to 31. This is due in part to the fact that most people don't know about the Department of the Interior: What does the secretary of the interior do, anyway?

No, it's not the person who orders the White House drapes, as I erroneously believed for an amount of time I choose not to divulge. However, the U.S. Department of the Interior has you covered, with a handy dandy "What We Do" page on their official website. As it turns out, they are responsible for a substantial amount of areas that fall within America's physical "interior," or, as the DOI puts it, by using "sound science to manage and sustain America’s lands, water, wildlife, and energy resources, honors our nation’s responsibilities to tribal nations, and advocates for America’s island communities."

Even though it might seem as though Zinke's confirmation as interior secretary is NBD, it's actually a pretty huge job. So what might Zinke have on his agenda on his first day of work?

Amazingly, the first listed item that falls under the purview of the DOI is climate change, and yes, that link to the DOI's climate change page is working. It would appear to be one of the few U.S. government websites that wasn't forced to scrub "climate change" from its webpages. I actually screen-grabbed the page because I was genuinely surprised to see climate change listed there, especially when President Trump has denied that climate change is real.

Here's hoping that Zinke will continue to make climate change a priority at the DOI. During his confirmation hearings, Zinke did veer from Trump's position on climate change by saying he doesn't believe that climate change is a hoax. While he also agreed that humans are one influence on climate change, "there's debate" on just how much impact humans have.

While Zinke said in a statement Wednesday that "respecting sovereignty of the Tribes" is an issue personally important to him, he's got a fight ahead of him in that arena already: The Standing Rock Sioux tribe has already vowed to take the U.S. government to court over the pipeline.

Zinke describes himself as a "Teddy Bear Republican" — so named for Republican President Theodore "Teddy" Roosevelt. But on Wednesday, New York Sen. Chuck Schumer blasted Zinke's confirmation in a series of tweets, saying, "You can’t be a Roosevelt conservationist when you vote to make it easier to sell off public lands," and "...when you support opening up public lands to increased extraction & #drilling." Schumer ended his tweets against Zinke with this hammer:

While Zinke didn't respond to Schumer's tweets on Wednesday, he did release a statement on his resignation as Montana Congressman, saying that he did so with a "heavy but optimistic heart." Zinke also stated that he was "humbled" to be President Trump's pick for the interior secretary role.

Hats off to you, Sec. Zinke — you've got your work cut out for you.