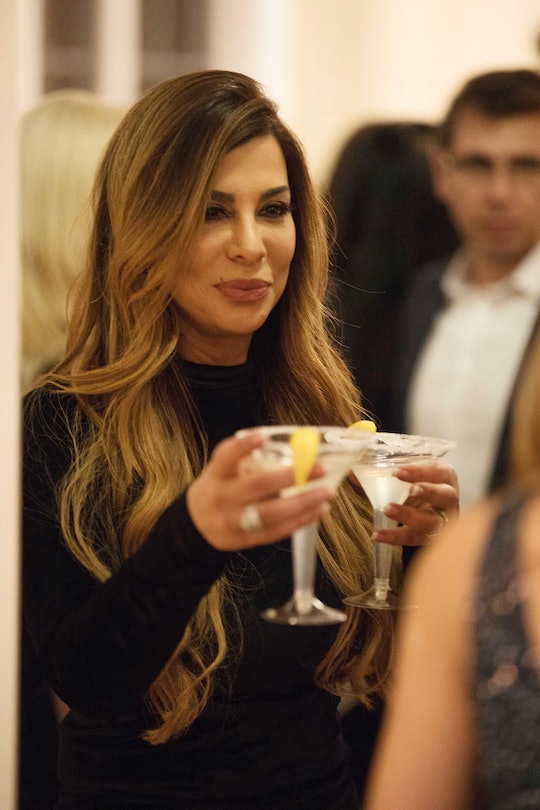 Siggy Flicker Has Found Her Calling Outside Of 'RHONJ'

The Real Housewives of New Jersey is back for Season 8 and among the returning cast members is Siggy Flicker, who's already making waves. After inviting the girls back to her "second home" in Boca Raton, Florida, she made quick work of getting on everyone's nerves. From policing everyone's behavior while behaving obnoxiously herself to demanding apologies on vacation, Siggy took everyone on a first class trip to Shadesville. But she's also discussed her blossoming new career and the tension it's causing in her marriage, prompting some fans to wonder: what does Siggy Flicker do, exactly?

The Real Housewives of New Jersey star was first introduced to us in Season 7 as a "relationship expert," thanks mostly to her book Write Your Own Fairy Tale: The New Rules for Dating, Relationships, and Finding Love On Your Terms, which as published in 2015. She used her platform as a matchmaker to make the talkshow rounds doling out relationship advice and even offered her services as a celebrity relationship commentator to In Touch Weekly, Huffington Post, and Us Weekly. In 2013, Marie Claire hosted an advice column she wrote about single womanhood called "Single With Siggy." She also served a brief stint as the star of a 2011 VH1 reality show called Why Am I Still Single?!, in which she would observe hopelessly single clients via hidden camera as she set them up on dates. Later, she'd analyze their dating habits with them and tell them everything they were doing wrong. Sounds fun.

But currently, Siggy seems to be high on the joy of speaking tours. We've watched her do one on the show, and we've listened to her describe ad nauseam how she feels "called" to the important work of... drinking champagne and signing books in hair salons while regurgitating Oprah-isms to unhappy middle-aged women in the suburbs? Yes.

She describes how she believes she's "the most talented human being on the face of the Earth" when she's doing her speaking engagements, however, there's a looming issue. Her husband seems to have a problem with her three-to-four-night-a-week speaking schedule and has straight up demanded that she stop working, claiming that her job is "getting out of hand." (And lest we misunderstand him, he made clear that his opinion wasn't a request.)

It's vaguely infuriating to hear Siggy speak at length about how newly empowered she feels in her career, while simultaneously giving equal weight to her husband's outrageous command for her not to work. We watched Melissa Gorga struggle with this last season, too, when she was opening her own boutique, but at least Melissa stood her ground. Siggy openly asks the women how to accommodate her husband's wishes when her career makes her so happy. Melissa was actually searching for new ways to explain the concept of equal partnership to her husband.

It's also hard to root for Siggy when she defends and uplifts her husband's toxic masculinity by saying things like how she married a real man and "not a wussy or a p*ssy" — and that's why he doesn't want her to work. First of all, masculinity and domineering behaviors do not go hand in hand. Second of all, casting judgment on men who are comfortable with their own vulnerability and actively work to empower women seems like an awfully dissonant take for a self-proclaimed "relationship expert." Some of the Real Househusbands in the New Jersey franchise exhibit problematic behaviors — Italian-American immigrant culture is a super visible breeding ground for toxic masculinity. But part of what makes RHONJ compelling is watching how their wives push back against it. It feels like Siggy's career woes are dragging the show back decades.