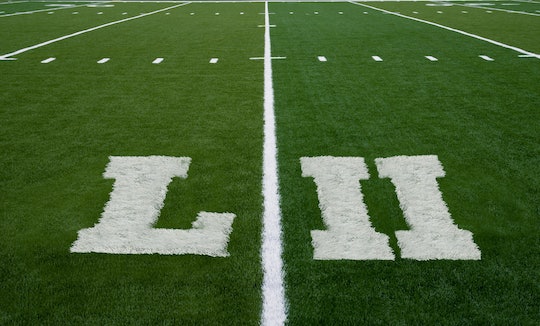 What Does Super Bowl LII Stand For In Roman Numerals?

Super Bowl LII is just around the corner, and if you're anything like me you're doing a massive double take at those letters I just typed. LII? What does that even mean? As a visual person, it's tripping me up in a major way and definitely lacking the zing that, say, Super Bowl XLVII had. And since it's been a while (ahem) since high school, I'm a little rusty on my ancient numbering systems. What does Super Bowl LII stand for in Roman numerals? Hopefully I'm not the only one who had to look this up.

Let me save you the suspense of another Google search: L represents 50 and II, as your probably already know, means two. So LII is the Roman numeral for 52, meaning this is the 52nd year the sporting event has taken place. The powers that be over at the Super Bowl decided to use the more familiar "50" for the big anniversary two years ago, but in 2017 they were back with Roman numerals for LI. Which begs the question, why?

The tradition can be credited to (or blamed on, depending on your point of view) former Kansas City Chiefs owner Lamar Hunt. In 1966 it was Hunt's idea to name the game the Super Bowl and to denote each year in Roman numerals, reported USA Today. It was no innocuous choice, either: Rumor has it Hunt thought it would add an element of gravitas to the game that was not yet a national treasure.

Although it can be argued that the strategy makes the football game seem even more serious and high-stakes than it otherwise would, not everyone is a fan. The average American is not well versed in the nuanced rules of Roman numerals, so are the football players themselves any better?

Philadelphia Eagles safety Corey Graham admitted in a press conference that when it comes to Roman numerals, "I'm not great with them," the USA Today article noted. At least he's not alone on his team: Defensive end Vinny Curry confessed a reliance on internet search engines to decipher the cryptic symbols. But while New England Patriots center David Andrews admitted the lettering system gets confusing, he maintained that, “At this point... it’s part of the aura and nostalgia of it. I think it’s pretty cool.”

While "Super Bowl 6" might not have the same pizazz as Super Bowl VI, why not just refer to the game by the year it was played? Couldn't that be the grand solution we're all looking for here?

Unfortunately, it's not that simple. Since the championship takes place at the end of the season, it's actually played in a different calendar year than the entire rest of the season. This is arguably not a huge problem, but could definitely cause some confusion. Whether more or less confusion than using the Roman numeral system will have to remain a mystery.

Those curious about a world without Super Bowl Roman numerals need only think back to two years ago, on the 50th anniversary of the sporting event. The Roman numeral for 50 is just a lone L, and apparently the NFL thinks its a dud. Jaime Weston, the National Football League's vice president of brands, explained that the temporary change was enacted for that single year because a solitary L isn't "as pleasing to the eye," reported Newsweek.

I can't argue with him there, but is LI really any better? I guess Super Bowl 2017 just had to take it for the team. Regardless of the complicated numbering system, millions of Americans will be tuning in on Sunday night to watch the sporting event of the season — even if half of us are only there for the commercials.

More Like This
What Does Super Bowl LVII Mean In Roman Numerals? Here It Is In Digits
15 Super Cute Valentine’s Day Pajamas
These 30 Walmart Appetizers Are Super Bowl Snack Goals (Get It?)
How Much Does The 2023 Super Bowl Ring Cost?
What Parents Are Talking About — Delivered Straight To Your Inbox