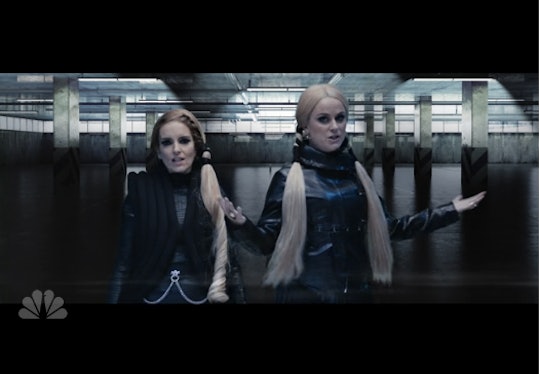 What Does Taylor Swift Think Of Tina Fey & Amy Poehler's "Dope Squad" Sketch? They've Been At Odds Before

It’s always a good time when Tina Fey and Amy Poehler do anything together, but their “Bad Blood” parody, “Dope Squad,” from last night’s Saturday Night Live might get them into some, well, bad blood when it comes to Taylor Swift fans. The sketch starts with the two comedians being asked “how they do it all,” and the duo breaks into a mock “Bad Blood” video — complete with “slow motion post-apocalyptic walks” and leather jumpsuits — about their “squad.”

It's not a fancy squad. It's a hardcore squad. It includes their nannies, the waitress who remembers their diner orders, and their “real-life gynecologist.” Gayle King and Amy Schumer are also randomly (and delightfully) part of the squad.

So that’s funny, right? The sketch is making fun of the faux-shocked, can women do it all-type tone that so many conversations with successful women eventually devolves into. “It takes a village, y'all” is the refrain of their parody.

But they're also teasing another one of the industry's self-proclaimed feminists, Taylor Swift — something they've done before. Back when they hosted the Golden Globes in 2013, they joked about Swift taking some “me time” from what seemed like her endless stream of failed relationships. And the comment hit Swift hard. She later told Vanity Fair that “there’s a special place in hell for women who don’t help other women” in response to the joke.

The hosts' retort? Poehler sort of laughed it off and said she felt bad that Swift took it the wrong way. But Tina Fey wasn’t really having it, saying at the time: "It was a joke, and it was a lighthearted joke. And it's a shame that she didn't take it in the crazy-aunt spirit in which it was intended." (And, just recently, Fey also hit back at people offended by Unbreakable Kimmy Schmidt's Native American storyline — which some felt was racist — by saying she doesn't apologize for jokes: "There’s a real culture of demanding apologies, and I’m opting out of that.") And then, later, at the 2014 Golden Globes, Fey brought up her history with Swift once again, congratulating Poehler on her Golden Globe win for Parks and Recreation by mocking the pop star's words, telling Poehler, "There's a special place in hell for you."

And it seemed, on Saturday night, Swift was the target once again — even though, this time, the duo threw a soft, funny lob at the pop star.

Swift has yet to respond to the sketch. But perhaps, despite the fact that she's responded negatively to the teasing in the past, she and her fans will see "Dope Squad" for the self-deprecating sketch that it was. (At least, I can only hope the sketch was intended to be self-deprecating, not nasty.) Fey and Poehler are "slicing to-do lists like a samurai" to get to a PTA meeting. Because even though we all might want to be, we will never be cool enough to be in Swift's squad. But hopefully one day we'll all find a place in the "Dope Squad" — and that Taylor will be included.