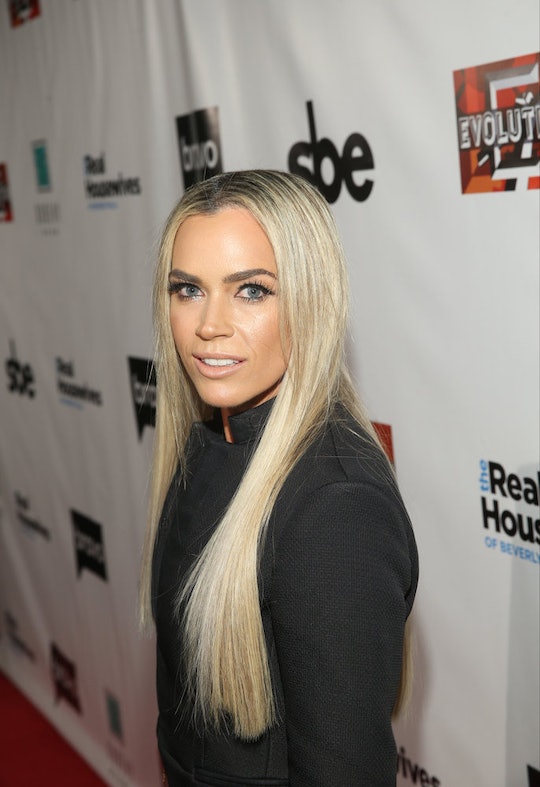 Teddi From 'RHOBH' Has A Fast-Paced Lifestyle

The term "housewife" in the Real Housewives shows is used somewhat liberally, considering most of the women have their own careers outside of the home and many aren't actually married. So what about the newest woman to join the crew? What does RHOBH star Teddi Jo Mellencamp do? A strong-willed woman who's definitely not afraid to speak her mind, Teddi has made a career out of one of her life's passions — fitness.

Teddi's introductory biography on the Bravo website details a little bit about her professional history and serious hobbies (though it doesn't once mention her famous dad, John Mellencamp). According to this bio, Teddi has two major passions in life aside from her family (which should be fairly obvious). These are horseback riding and fitness. The bio also states that Teddi started riding horses seriously at the tender age of 4, and went on to compete in the sport throughout the country, finally relocating to Los Angeles when she was 17 years old. She returned to riding as an amateur after having children, but it is not her profession. For that, Teddi turned to wellness and fitness, and, more specifically, helping others achieve their own fitness goals. Teddi now has her own company where she is an Accountability Coach. And from what I can tell, she really loves her job.

Teddi's company is called LA Workout Junkie, where she and her team encourage women to stick to their programs and achieve their goals through check-ins and occasionally a healthy dose of tough love. Think of Teddi like the friend who's there to call you and make sure you actually got up and went to the gym that day, and didn't just press snooze 12 times.

According to the email response I got when I filled in the website's questionnaire about the program, it's pretty intense. Teddi does not mess around when it comes to this stuff. Should you choose to become a client of Teddi's you'll have to agree to commit to a strict 15-day diet that includes zero alcohol intake and a low-calorie menu as well as provide photographic evidence of yourself doing some sort of cardio activity. If you fall through during these 15 days you'll be dropped with no refund. Sounds harsh, but I guess that is where the "accountability" bit comes in.

It's also important to note that Teddi and the other coaches who work with her have all been through the same program. On the website, each team member shares a little bit about her own fitness journey, which is pretty encouraging.

Teddi herself has been very open about her own weight struggles. "I was a weight fluctuator my whole life,” Teddi said in an interview with People, clarifying that she weighed over 200 pounds when she was pregnant with her son Cruz who is now 3 years old. “I thought it was just going to come off, but it didn’t. I was constantly complaining to my husband and my friends. I was angry a lot of the time." When explaining about how her habits have changed and how she keeps so thin, Teddi said, "I listen to how I feel, and I don’t punish myself. There are some days I’m tired and grumpy and I want a tub of ice cream, but then I just have a bite of ice cream and go on a walk."

I certainly don't subscribe to the idea that "healthy" necessarily equates to "thin" or that one has to be thin in order to be happy. But I do have nothing but respect for Teddi who seems to have found how to be happiest in her own body. And turned it into a business.