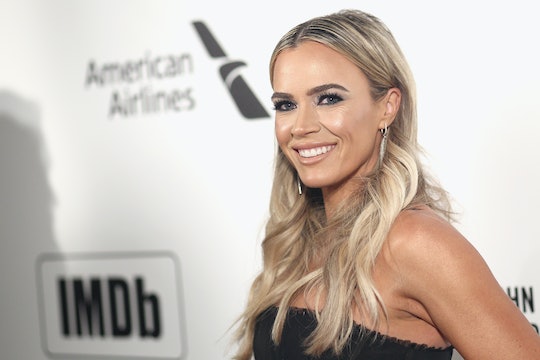 Puppygate is still in the process of unfolding on The Real Housewives of Beverly Hills, and for fans who are watching the train wreck in slow motion, the question of what Teddi Mellencamp thinks of Lisa Vanderpump is a big one. At this point, the prevailing theory seems to be that Vanderpump orchestrated Puppygate in order to cause drama, and Teddi was but a pawn in her scheme to tear down Dorit Kemsley. Teddi supports this theory, based on her champagne flute feud with Dorit from last season.

"I think [Vanderpump] used me because of my past relationship with Dorit," Teddi said in an interview with OK! Magazine. "And I don't think she thought I would figure it out."

Teddi freely admits that she got caught up in the plot because of her history with Dorit, and she more or less concedes that she let Vanderpump's status as an OG Housewife intimidate her.

"I'd been told a very bad story. I have a bad taste in my mouth with Dorit, and I was like, hey, I'm a new housewife and the most senior one is asking me to do something," she continued. "So I went along with it, until I couldn't."

In case you aren't exactly clear on the details: between seasons, Dorit adopted a puppy from The Vanderpump Dog Rescue Center and, a few weeks into her puppy ownership, realized she'd have to re-home the dog. The puppy, named Lucy, wound up biting both Dorit's toddler daughter and her husband. When Lucy's aggression issues failed to improve, Dorit ultimately decided that the best thing for her family was to give Lucy away. A friend offered to adopt the dog, and Dorit thought that was that. But the friend wound up returning the dog to a shelter, which The Vanderpump Dog Rescue Center discovered because all their dogs are microchipped. (An alarm goes off in their system when a dog of theirs reenters the shelter system.)

Before the details of this misunderstanding were clear, a story was leaked that Dorit returned a puppy she adopted to a shelter, which was obviously a bad look. Meanwhile, Vanderpump Dog employees gossiped about Dorit's alleged shelter return to Teddi and Kyle Richards, effectively turning them against her. Teddi believes this was part of the set-up, too.

Vanderpump had several opportunities to sort out what was really happening with the puppy Dorit had adopted, according to Teddi. But instead of taking care of it privately, Teddi alleges that Vanderpump instructed her employees to gossip about Dorit returning the dog. Teddi told OK!:

It was completely set up to punish Dorit. If they were so concerned about the dog and this wasn't just about making your friends look bad, they could have said, 'No, go get the dog and bring it back to Vanderpump Dogs.' Or, 'We're going to go do a home check at this new woman's house.' They didn't do any of this. That's why I think it's not about the dog, it's about making your friends look bad.

It looks like Teddi learned a very important lesson about Housewife manipulation here, but the season has just begun and her feud with Vanderpump has a long course to run.