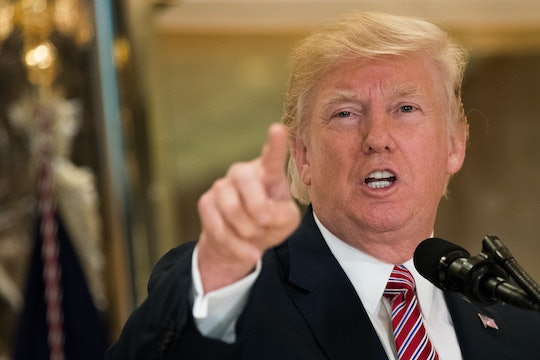 In a Tuesday afternoon press conference, President Donald Trump once again placed blame on counter-protestors to this past weekend's Charlottesville rally, asking: "What about the alt-left that came charging at the, as you say, the "alt-right?" Do they have any semblance of guilt?” This statement certainly has citizens wondering what exactly the "alt-left" is and why the president has repeatedly defended those at fault for the egregious and hateful violence that unfolded over the weekend.

At Tuesday's press conference at Trump Tower in New York City, reporters probed Trump's previous insistence that the Charlottesville rally and counter-protest consisted of violence "on many sides." Trump called out the supposed "alt-left" for acts of protest against Nazi and white supremacist groups, and insisted that said members of the "alt-left" acted "very, very violent[ly]." But, to equate counter-protestors with those marching to perpetuate white nationalism isn't just wrong — it also disrespects the loss of life that occurred due to these violent acts.

From there, Trump defended the protection of Confederate statues, stating that removing said monuments might lead to dismantling other racist symbols, which he deems unnecessary. According to The New York Times, he said:

Many of those people were there to protest the taking down of the statue of Robert E. Lee. This week, it is Robert E. Lee and this week, Stonewall Jackson. Is it George Washington next? You have to ask yourself, where does it stop?

Watch Trump's commentary on the matter below:

Though Trump admitted that rallying Nazis and white supremacists are "bad," he felt the need to explain: "You had a group on the other side that came charging in without a permit. And they were very, very violent." One member of the "other side," Heather Heyer, was killed by a white nationalist protestor on Saturday, according to NBC News. The man reportedly struck her with his car, injuring 19 others, too.

Still, the president feels the need to blame the "alt-left" for their involvement in the events instead of focusing wholly on the hateful, racist ideologies that fueled it in the first place. What's more, David Duke, the former leader of the Ku Klux Klan, thanked Trump for his supportive remarks criticizing the "alt-left," as The Hill reported.

Comparing the tear-down of a racist statue "without a permit" to the killing of a counter-protestor by a terrorist is blatantly wrong, but Trump continues to make said "connections" time and time again. In naming counter-protestors as the "alt-left," Trump falsely equates the individuals that are speaking out against white supremacy with the actual white nationalists that comprise the "alt-right" — Nazis and KKK members among them.