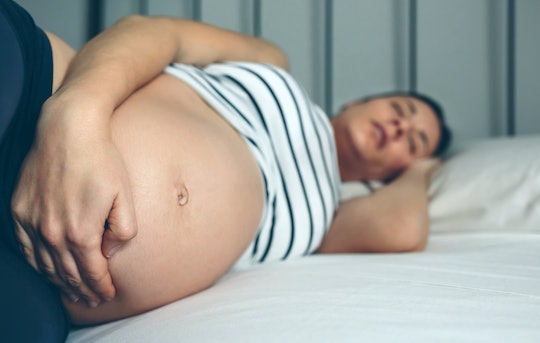 Braxton Hicks May Feel Like A Tightening Belt To You, But Here's What Your Baby Feels

I had so many Braxton Hicks contractions during both of my pregnancies. They started in my second trimester and continued until the day I delivered. They were harmless, but increasingly annoying and triggered a lot of anxieties I had surrounding my pregnancies. Every time I had one late in the night, or when I was just trying to calm myself down, I'd think, "This is it, I'm going to go into labor." It never seemed to correspond with increased or decreased movements which led me to wonder, what does the baby feel during Braxton Hicks contractions? Surely all that tightening is noticed by them, too.

New methods of fetal monitoring, namely high-definition three dimensional ultrasounds, have led to a boon in the science of fetal response and fetal awareness. This is understandably a hot topic in medicine because when science looks at how a fetus copes with stress or reacts in certain scenarios, they're able to better predict how the pregnancy will progress and what the likely outcomes will be, noted Indian researchers in Jaypee Journals. While they noted that Braxton Hicks in and of themselves are not usually a cause for concern, they did find that women with Braxton Hicks plus other conditions such as gestational diabetes tend to experience the false contractions more frequently, and they found that fetuses in utero don't tend to register the periods of contraction of the uterus.

Braxton Hicks feel a lot more strongly to us than they register to a fetal monitor or even, apparently, to our babies. It's observable truth that the strong contractions of labor bring about a corresponding rise in the heart rate of the baby about to be squeezed through the birth canal. However, I spoke to labor and delivery nurse Amale Mbikwana of Minnesota, and she tells Romper there is a difference in utero between a Braxton Hicks and a real contraction. She notes that it's "like getting a hug from someone you barely know, and a bear hug from your dad on your wedding day." One is sort of a barely-there tap of the hands on the shoulders, maybe even an air-kiss, but the other is a hug so tight you can't really breathe, you're wondering why your dad insists on wearing so much cologne, and you're kind of happy when it ends.

According to Fetal Development, this not-really-noticing is all a part of normal fetal behavior. As the Jaypee article explained, some intrauterine activities become a rote part of the baby's everyday life, so much so that it's barely registered. Therefore, when you're wondering what a baby feels during Braxton Hicks, it's like wondering what a baby feels when you eat or when you stand or sit. They barely notice, but when these change, your baby gets attentive, and that becomes a measurable statistic.

Mbikwana tells Romper that when patients are hooked up to the monitor at risk for preterm labor, one of the chief metrics they observe is the heart rate of the infant during times of contraction. If it spikes regularly, especially if it gets dangerously high or falls, the patient is likely in active labor. "You don't see the regularity of the heart rate increase or huge dips with Braxton Hicks contractions. With labor contractions, the baby is feeling the whole thing." And likely hugely displeased.

When I was pregnant, I think my babies just realized that nothing was happening and kept up their sleepy rituals without a thought. This actually explains a lot, because they're very good at sleeping through the sounds of New York City and the shaking of our house as the train rides by. Maybe Braxton Hicks are more than just your body getting ready to give birth. Maybe it's a crash course in ignoring all else in favor of sleep for your little ones. If only it seemed to help screaming newborns, am I right?