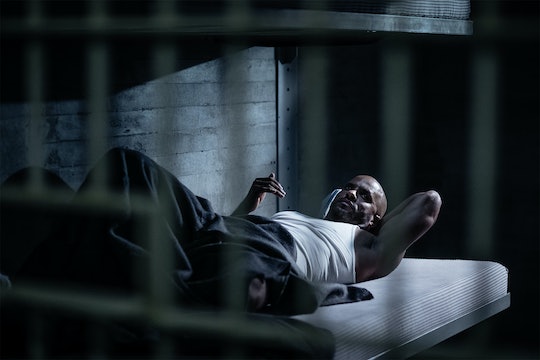 The Gold Coin On 'American Gods' Is Extremely Powerful

Starz's latest series American Gods (based on Neil Gaiman's novel of the same name) follows the gradual build-up to all-out war between the Old Gods (from ancient mythologies and cultures) and the New Gods (from modern America's obsession with media and technology). As you might expect from a show about deities, there's a lot of inexplicable magic at work throughout the story. But perhaps the most mysterious bit of magic is found in the gold coin that Shadow Moon (Ricky Whittle) acquires in the premiere. But what does the gold coin do on American Gods?

The first episode of the new series does a ton of world-building to introduce viewers to the very specific universe that Gaiman created. But at the same time, the premiere is pretty plot heavy — in that a lot happens. To name a few of the major, setting-plot-into-motion events: Shadow Moon's wife is killed in an accident, Shadow is released several days early to attend her funeral, he meets the mysterious grifter (and ancient Norse god, though that bit's unknown to Shadow at first) Mr. Wednesday. He begrudgingly agrees to act as Wednesday's bodyguard, his right-hand man, throughout a mission that Shadow doesn't fully understand. (That mission involves recruiting Wednesday's fellow Old Gods in a battle against the New Gods.)

Amusingly, Shadow and Wednesday also meet Mad Sweeney, a leprechaun and acquaintance of Wednesday. Shadow and Mad Sweeney have a bar fight over coin tricks — Shadow can do simple tricks, while Mad Sweeney, being a magical creature, can pluck gold coins out of thin air.

The fight resolves and Mad Sweeney ends up giving Shadow a gold coin. Shadow later attends the funeral of his wife, Laura, and "gives" her the coin by dropping it onto her freshly dug grave, where it sinks beneath the dirt. But what was probably intended to be a parting gift actually has the opposite effect — because if the series plays out as it does in the novel, this will result in Laura rising from the dead.

The show hasn't yet address the mechanics of Laura's highly anticipated resurrection, but the promos alone make it clear that she's not actually alive again. While she's able to move around and interact with her husband, she's still decomposing and very much dead.

While the series hasn't yet delved into the power of the gold coin, the book version makes clear that it's what was able to bring her back. Without going into too much detail and getting too spoiler-y, giving Shadow that coin in the novel ends up being a big mistake for Mad Sweeney and costs him a great deal — he even attempts to get it back from Shadow, but by that point, it's long gone and with sorta-dead Laura. Despite all that, the actual mechanics of how the coin brought Laura back halfway remain unclear and shrouded in mystery, like much of the story.