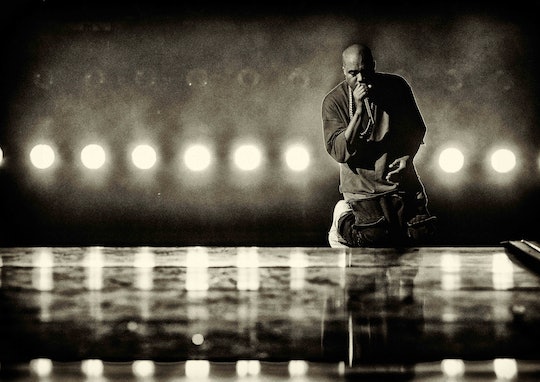 What Does ‘The Life Of Pablo’ Mean? Kanye West Renamed His Album Yet Again

Fourth time's a charm, right? After more than a year of indecision — or maybe it was inspiration? — Kanye West revealed the name of his seventh album. The Life of Pablo is expected to drop on Thursday, and West has announced a massive listening party at Madison Square Gardens to commemorate, according to The Guardian. But aside from whether the album really will arrive on Thursday, the question from West fans seems to be what does The Life of Pablo mean? There are so many notorious Pablos to choose from: famed artist Pablo Picasso, drug kingpin Pablo Escobar, Chilean poet Pablo Neruda, or even a random unknown Pablo that West befriended in his travels. Which one is it, West?!? Fortunately, Yeezy has given us a few bread crumbs to follow.

West first hinted at a seventh album last year with the album cover for So Help Me God, the first title for the project. West later changed the title to Swish — and even released a track list — before settling on WAVES. After West accused Wiz Khalifa of stealing the title WAVES, it made sense that he'd change it again at the last minute. But the way he did it was typical Yeezy.

Twenty-year-old Dante Holley managed to figure out Kanye's puzzle (though, according to MTV, he hasn't been contacted by Yeezy's team yet about his prize). And Holley's thought process gave fans a solid theory on who Pablo might be.

When I first saw [T.L.O.P.] I initially thought it’d be ‘the something of something,’ and then I thought ‘The Life Of The Party.' But then I was listening back to the first two singles he dropped [“Real Friends” and “No More Parties In L.A.”] to look for clues. And that’s when I heard the lyric, ‘I feel like Pablo when I’m working on my shoes.’

Holley told MTV he thought the lyric from “No More Parties In L.A.” was a nod to Pablo Escobar — Escobar's lavish lifestyle is a common metaphor used by rappers — but looking at the entire part of the song gives a possible deeper meaning:

I feel like Pablo when I’m working on my shoes

I feel like Pablo when I see me on the news

I feel like Pablo when I’m working on my house

Sure, the entire portion could be a nod to Escobar, but not all the metaphors fit. West, who once said that had he pursued his original dream of entering fine art he would’ve been Pablo Picasso or greater (because, of course he would), could have been talking about the famed painter, but not all of those references fit either.

Twitter user Alex Tarakjian shared a plausible theory from Reddit to explain why no single Pablo seems to fit the mold: maybe there's more than one Pablo. When West “works on his shoes” he's an artist like Pablo Picasso, when he sees himself on the news he's as notorious as Pablo Escobar, and when he's working on his house he's a regular guy — a Pablo.

TLOP could very well be a tribute to all three sides of West's enigmatic personality. The fan theory has taken hold on Twitter as fans passed the final hours before the album's Thursday release. By Thursday night, West should have revealed the truth — and whether Holley really will get those Yeezy's.