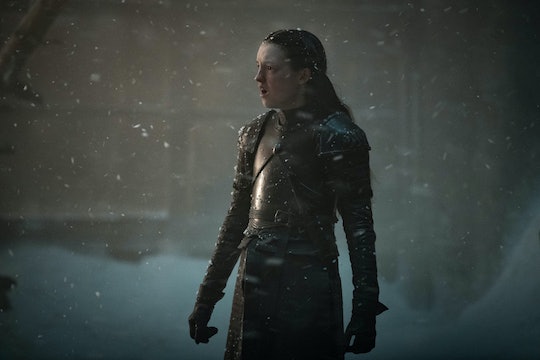 If You Want A Strong, Take-No-Prisoners Name For A Baby Girl, Lyanna Might Be It

Warning: spoilers ahead for Season 8, Episode 3 of Game of Thrones.

Lyanna Mormont, Lady of Bear Island. First to declare Jon Snow the King of The North. The baddest woman of the Seven Kingdoms. Ruler of Men. Daughter of Maege, first cousin of Jorah, slayer of wight giants. If you watch the show, you'll also know that Lady Lyanna Mormont was named for Lyanna Stark, Jon Snow's long dead mother, but what does the name Lyanna mean? Because it's probably not "dead giant slayer," though that would be extremely cool.

As it turns out, Lyanna, (alternate spellings include Liana, Lianna, and Leanna) has its roots in a few languages, noted Name Meaning. It could be French, Hebrew, Persian, Latin, and even Arabic. It's the name of a city in Iran, noted for its brilliance. In Hebrew, its root "Li'on" means strength, and "Ilan" means "tree." The thing about the name Lyanna is that it is a modern construct — a new name. It's like Kayleigh or Skylar; it's recently made up, according to census-based name website, Names.org. That means that while we may compare it to the Arabic girl's name Ilyana, meaning "tender and delicate," according to QuaranicNames.org, we're really just making educated guesses based on the similarities of the sounds in the names.

That doesn't mean it's not rich with meaning. Similar names like Illana, Leana, and Lee Ann have been used for centuries. And now, thanks in large part to popular culture, Lyanna has a depth of meaning to many of us. Shirking it off because it's a character in a book or television show doesn't mean it's less powerful. I have a close friend named Othello, and he's proud of the Shakespearean meaning behind his name. Why would any of us argue that Lyanna is any less valid of a choice than Juliet? We shouldn't. We, as a people, have always looked to literature to name our children, starting with our holy books. My own children are named for characters in the Bible, and I'm proud of that fact.

Trust me, Shakespeare was as popular as George R. R. Martin in his day, and like Tolkien before him, I don't think Martin's works of fiction are going to fade away any time soon. And if we're being truthful, Davos and Lyanna are much more useable than Bilbo or Frodo, unless you're naming your cat. Heck, I even like the name Tyrion for a boy, but my husband would never allow it due to all the drinking and scheming. (Two of his better hobbies, in my opinion.)

Lyanna is a beautiful name for a fierce woman. Plus, it just goes so well with so many last names.

Names evolve over the centuries just like the language. Spellings change, and meanings dissolve and begin anew at the start of a fresh epoch. Names like Rudolph and Maeve were once as common as Jacob and Elizabeth. Think about it, even if you loved the historic name Ramsay, if you're a Thrones fan, you want that name to die a horrific and painful death, just as Sansa said it would before closing the door.