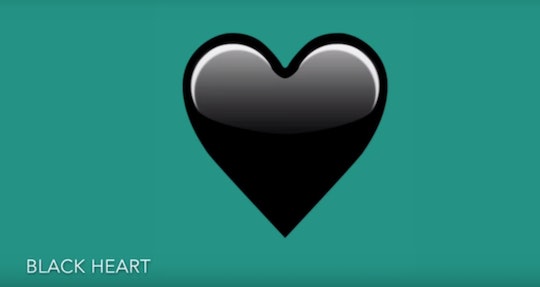 At this rate, there's basically an emoji to help express how you're feeling at any given moment throughout the day. Some moments call for the ever-popular unamused side eye emoji, or the very relatable sleeping face, or even the upside down smiley face when you just don't know what to say. But what about those times when your inner darkness has completely taken over, you're feeling sad, or you want to express sorrow in a simple way? Well, that's when the black heart emoji's meaning comes in handy, friends.

The black heart emoji can also be used when you're feeling a bit emo. According to Dictionary.com, the black heart is "the perfect emoji for a rainy day when you are sitting inside, listening to My Chemical Romance or Dashboard Confessional, and feeling angst-y and misunderstood... It means you are feeling emo, have a dark twisted soul, morbid sense of humor, or just love sad stuff."

When the black heart emoji was first announced in 2016, according to Emojipedia, it caused a bit of a social media frenzy. "The new emoji release is going to include a black heart [and] I want to cry," one fan of the emoji tweeted back in 2016. "Thank you Apple for adding an emoji that represents my insides." Another fan wrote on Facebook, "I can't find the black heart emoji to match my soul so I guess this will do for now..."

Since the black heart emoji first debuted on phone screens over four years ago, however, people are still very much obsessed with it and its meanings are even more far-reaching and a bit vague. For instance, in April 2020, Kylie Jenner captioned a photo of her wearing a sexy black jumpsuit with, you guessed it, a single black heart emoji.

Whether the Kylie Cosmetics mogul was trying to convey sorrow or some dark sense of humor with her emoji use seems unlikely, though not impossible, of course. But, what seems more likely is that the black heart emoji perfectly complimented her outfit and Instagram photo.

The black heart emoji was one of 72 new emojis released by The Unicode Consortium in 2016, That update also included the very popular drooling face, the face palm, the avocado (yum), bacon, and a glass of milk. To date, according to Business Insider, there are over 2,800 emojis you can choose from while texting and posting on social media.

Many moments call for the laughing-so-hard-I'm-crying emoji, others call for a kissy face, some need a thumbs up. But some days or some photos just really need a black heart emoji. Use it to let others know you're feeling a bit gloomy or use it to accessorize your Instagram posts.

This article was originally published on June 24, 2016