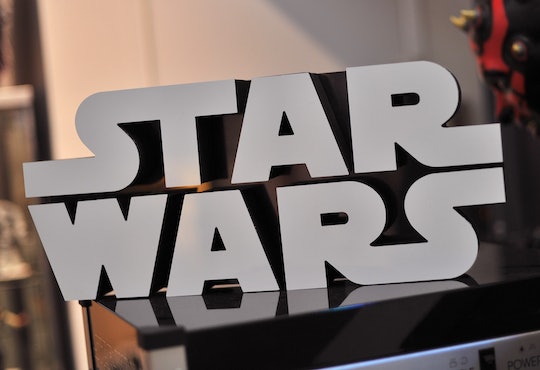 On Monday, the official Star Wars Twitter account just dropped the name for the newest Star Wars movie and, wait for it — it sounds freaking terrifying...ly awesome and is it here yet? No? GAH. Star Wars: The Last Jedi. Whoa guys, whoa. Heavy, am I right? But what does the new Star Wars title mean? There are so very many implications. As Gizmodo was quick to point out, the word "Jedi" can be both singular or plural, so the last Jedi might not refer to a singular person, but perhaps a whole movement of telepathic space ninjas.

There's something else to consider about the Star Wars movie title announcement, too: That ominous-looking red font. Every previous Star Wars movie has had the franchise title in that signature hopeful yellow — but now fans are greeted with a very foreboding red against the black and white star field that calls up images of Kylo Ren, granddaddy Vader, and the intergalactic menace of The First Order — the latest and perhaps most terrifying iteration of the Empire yet.

Right, so back to The Last Jedi — just who might he, she, or even they be? Spoilers ahead if you haven't seen The Force Awakens, which, seriously? Go see it already.

Just before the credits rolled at the end of The Force Awakens, the Jakku scavenger turned fledgling Force-wielder Rey handed over a very old lightsaber back to its original owner: Luke Skywalker. Skywalker had been on a bit of a sabbatical (read: Luke, where the f*ck have you been for 30 years, man?!) on an island somewhere in the galaxy. When Luke peaced out, the rest of the Jedi peaced out with him, making him the last surviving Jedi Master. So, I'd bet good money that "The Last Jedi" refers to Luke.

Of course, it could also refer to Rey, since she can clearly use the Force, or even Finn, the First Order stormtrooper turned Rebel. Given that the Force was awakened in the last movie, "The Last Jedi" could very well refer to a resurgence of Jedi knights with perhaps Rey and Luke at the helm, with Luke's tutelage and Rey's likely training. Let's be honest: The end of The Force Awakens was practically begging for a Jedi academy training montage backed by John Williams' rendition of "Eye of the Tiger."

While The Last Jedi won't open in theaters until Dec. 17 this year, fans shouldn't have to wait too much longer to start getting hints at who the last Jedi could actually be. Lucasfilm president Kathleen Kennedy told the BBC last December that the first trailer for Star Wars Episode 8 should drop in "spring 2017" — which Digital Spy has sleuthed out to mean as early as April, or even attached as a trailer to Disney's live-action Beauty and the Beast, which opens in March.

I don't know if my inner nerd could handle the new Star Wars movie trailer AND Emma Watson as Belle in my childhood favorite Disney movie. I might actually explode. Until then, let the "Who's the last Jedi?" guessing game commence!