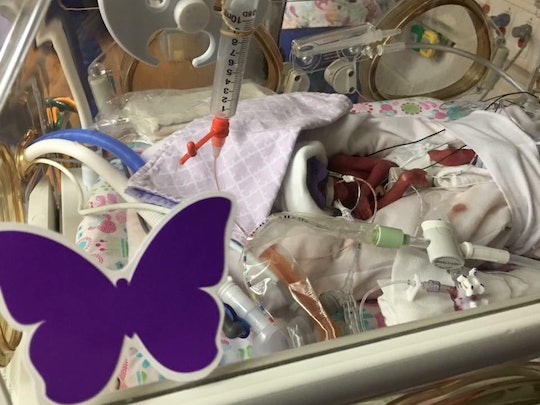 Here's What A Purple Butterfly On A Baby's Crib Actually Means

When my son had to stay in the Neonatal Intensive Care Unit (NICU) after he was born, I saw a variety of different decorations on the babies' bassinets, including stickers, name cards, and family photos. And then I noticed a single purple butterfly on a baby's crib, and had no idea what it was or why it was there. So I asked our NICU nurse what it meant, and she told me the heartbreaking, but important, significance of this symbol for NICU parents.

The purple butterfly sticker originated with UK mom Millie Smith, who lost one of her twin daughters, Skye, to anencephaly, a neural tube defect, just three hours after her birth in 2016, according to Today. As her surviving twin, Callie, recovered in the NICU at Kingston Hospital in the UK, Smith was struck by how many people simply stopped talking about the child she lost, and how unbelievably difficult it was to hear people who didn't know she had twins say careless things or make hurtful comments, even if it was by accident.

To help other loss parents of twins and multiples, Smith created purple butterfly stickers for NICU bassinets and a poster explaining that the babies in those bassinets had lost their twin sibling. Since starting the Skye High Foundation to raise money for these stickers in 2016, Smith's purple butterflies, and compassion for this unique group of loss parents, has spread to hospitals worldwide. As Today reports, when Smith discovered she was pregnant with twins in early 2016, she was ecstatic. Just two weeks later, at 12-weeks gestation, Smith and partner Lewis Cann were crushed to discover that one of their twins, who they would name Skye, had a condition called anencephaly, which caused her brain to not form properly. It was likely she would not survive long after birth.

Smith made the heartbreaking choice to try to carry both twins to term, knowing that Skye might only live for moments. As she told Today, she chose the name Skye partly as a way to remember her daughter after she was gone. “Skye was somewhere we knew she would always be," she said, "that we could look up at the sky and remember our baby.”

Smith delivered her twins at 30 weeks via emergency C-section at Kingston Hospital, with the help of a special bereavement midwife who provided emotional support while they said goodbye to Skye, who lived for three hours after birth, Today reports.

Their surviving twin Callie required a weeks-long NICU stay to recover after birth. While the staff and visitors who knew about the twins were compassionate and kind, Smith found that after time they simply stopped talking about the twin she lost, as if she hadn't existed at all. As she told Today, "As time passed, people stopped talking about Skye....After about four weeks, everyone acted as though nothing had happened, meaning the families around me had no idea about our situation."

Unfortunately, that meant having to tell their story to every new person who walked in the room. One day, a fellow NICU twin mom, unaware that Smith had lost a twin, complained to her that she was "lucky" she didn't have twins. This experience would change her life, and motivated her to find a way to prevent other NICU moms who had lost a twin or babies in larger sets of multiples avoid the same hurt.

As she explains to Finley's Footprints, "We wanted something that would explain their story for them, without them having to say anything." Her solution: placing purple butterfly stickers on the bassinets of babies who had lost a twin, and an accompanying poster on the NICU wall explaining to workers and parents the message behind the stickers and allowing them to treat those NICU parents with sensitivity and empathy about their unique experiences of infant loss.

The poster includes the purple butterfly logo and the following text:

Butterfly Logos: When visiting this hospital either as a patient, partner, relative, or friends, please be aware of the butterfly logo which may be on some cots or incubators. This represents a baby that was part of a multiple pregnancy, but sadly not all the babies survived and parents have chosen that they wish to make others aware.

To further spread Skye's legacy, and help parents cope with the unique experience of infant loss in multiple pregnancies, Smith started the Skye High Foundation. They have raised almost $6,000 to create purple butterfly stickers and cot cards for NICU bassinets, as well as purple butterfly blankets for surviving babies, as a way to remember the siblings with whom they shared a womb, Smith told Finley's Footprints.

While she was initially only planning to distribute stickers at Kingston Hospital where her babies were born, media attention around the purple butterfly stickers has led to their use in the UK, USA, Australia, New Zealand, and The Netherlands, according to Nationwide Children's. Her simple solution also inspired the Purple Butterfly Project, an organization which helps health care providers support families through loss in multiple pregnancies.

More Like This
25 Winter Solstice Baby Names For Your Magical Little One
6 Bizarre Superstitions About Christmas Babies
Baby Growth Spurts: When They Happen & What To Expect
41 Strong & Sweet Baby Boy Names That Start With “K”