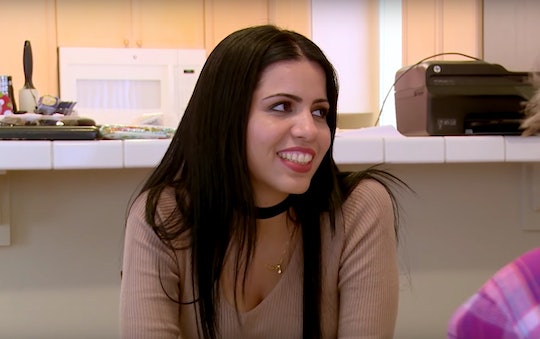 This very dramatic season of 90 Day Fiancé has finally come to an end, and fans finally know which couples actually got married. One of said married couples — spoiler alert — is Colt and Larissa. Some fans may be surprised that Colt and Larissa's engagement ends with a wedding, because of all the drama they've had this season. That said, what does the rest of the 90 Day Fiance cast think of Larissa?

One person who has had mixed opinions on Larissa all season long is Debbie, Colt's mother (and now Larissa's mother-in-law). Colt and Debbie shared a home, just the two of them, for many years before Larissa came into Colt's life. Colt's engagement to Larissa majorly disrupted Debbie and Colt's relationship, and from the moment Larissa arrived, she and Debbie had trouble getting along. By the time Larissa and Colt said "I do," Debbie was a bit more on board with her daughter-in-law.

However, at some point after the wedding, the state of Nevada pressed charges against Larissa for "domestic battery" following a fight with Colt, according to E! Online. Colt explained on the show that Larissa had to spend 48 hours in jail. When Colt told Debbie about the charges (while Larissa had locked herself in her room) at the end of the finale episode, Debbie seemed very distressed. Whether or not Debbie likes Larissa, she has to deal with her at the moment.

In the preview for the tell all reunion episode, several cast members shared their opinions on Larissa. "I'm really annoyed with Colt and Larissa," Jay said. "I don't even want to see her. Make me cringe," Jonathan whispered to Fernanda as they waited for Larissa to enter the set. "She's here trying to get a green card. Be real," Fernanda told Jonathan. "He's so stupid. He deserve her."

The preview also showed Larissa in the moments before she saw the rest of the cast during the tell all, when someone was trying to get her to go on stage. "No, my enemies [are] there, and they will look amazing. And I look like s*it!" Larissa was heard saying.

So in the meantime, before the tell all airs, why do so many of the 90 Day Fiancé cast members seem to dislike Larissa? Well, following the news of Larissa's arrest, Fernanda and Larissa bumped heads a bit online. In November, a 90 Day Fiancé fan account posted the comment section of a photo that Larissa shared and then deleted (which, based on comments, seems to have been her posing with a police car). Fernanda commented on the post, according to the screenshot. "How can you make fun," she wrote. "A lot of people were genuinely concerned about you."

Around the same time, news broke that Larissa is allegedly the mother of two children. She seemed to confirm the news in a since-deleted Instagram post, which was shared to Reddit. In the post, she explained that she was not in a position to care for her children. Larissa wrote that her son lives with his aunt, and that her daughter lives with Larissa's father and his wife, and that she hopes to bring them to the United States soon. According to another Instagram post shared to Reddit, Fernanda once explained why she had such a strong criticism for Larissa: because Larissa left her kids in Brazil.

It will certainly be interesting to see how all of this unfolds during the tell all episode!