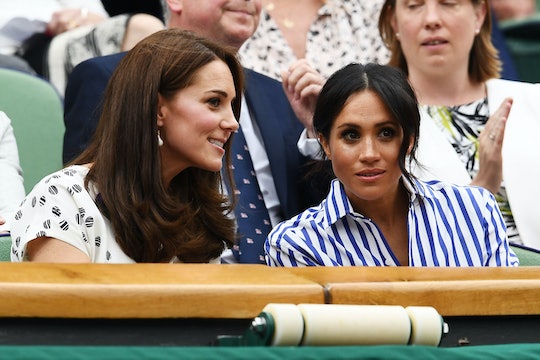 Just as royal superfans begin to suffer withdrawal following the royal wedding of Prince Harry and Meghan Markle, People and ABC have teamed up for a special all about the monarchy. The two-night event features a four-hour documentary miniseries with interviews from royal historians, media experts, and folks close to the Windsors. So what does the royal family think of The Story of the Royals? They don't typically comment on specials like this unless it's to denounce the accuracy of an unflattering portrayal. And even then, it's often Kensington Palace which makes an official statement, not a member of the royal family personally. So, unsurprisingly, there's no official comment on what the royals think of the special. And honestly, there's so much media about them that they probably haven't tuned in to absolutely all of it.

It's hard enough to get intel on what they think of Netflix juggernaut The Crown, although we finally have enough rumors and third-party anecdotes to surmise that Queen Elizabeth enjoys it. (Prince Philip, on the other hand, reportedly said to a friend of Matt Smith's, "Don't be ridiculous," when asked if he'd watched it.) So it's unlikely that anyone will ever hear directly from a royal on what they think of a one-off TV special.

The Story of The Royals went into production last spring, and, along with interviews featuring palace experts, the special also documents last May's royal wedding and the birth of Prince Louis, William and Kate's third child. According to ABC:

The Story of The Royals captures the mystique and history of the monarchy as it hits dizzying heights this spring with a new royal baby and the introduction of Meghan Markle, the first American to marry into the British royal family since Wallis Simpson in 1937. Through its many loves, losses, extravagances, challenges and charms, the British royal family has grown into a 21st-century monarchy, and The Story of the Royals will illustrate that evolution as well as examine the American obsession behind all things royal.

One of the big questions the doc seems to pose is how did we get here? That is to say, how did a member of the Windsor family manage to marry a divorced American when, just three generations ago, in 1936, King Edward VIII was forced to abdicate the throne in order to do the very same thing. And that doesn't even scratch the surface of introducing the first biracial "princess" in the modern era (Meghan's official title, of course, is Duchess of Sussex).

"There have been crisis moments in the 20th century," the trailer teases, eventually concluding, "Maybe things have moved slowly in the past, but they're certainly not moving slowly now."