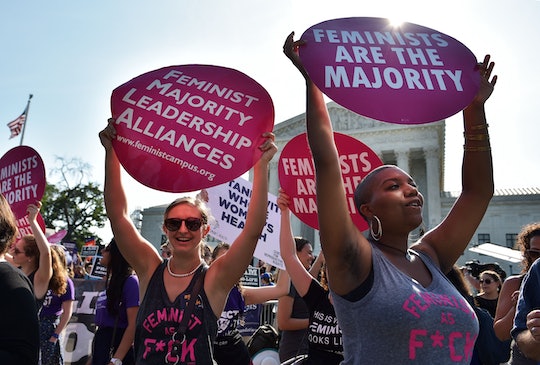 What Does The SCOTUS Abortion Ruling Mean For Abortion Restrictions In Other States?

Monday's landmark ruling from the Supreme Court struck down Texas law H.B. 2, which placed restrictions on both abortion providers and facilities, threatening to eliminate access to women's reproductive healthcare for large swaths of the state. Texas isn't the only state with similar laws on the books. So what does the Supreme Court ruling mean for abortion restrictions in other states? They're next.

The ruling is the most significant on abortion rights since 1992's Planned Parenthood v. Casey, which established protections against the government placing an "undue burden" on women trying to access their right to safe and legal abortion.

There are five states across the country which, like Texas, have attempted (and some, successfully) to limit abortions by placing regulations on clinics and doctors to effectively drive them out of business. The two specific regulations that were deemed unconstitutional in the Supreme Court's Whole Women's Health ruling were, first, that doctors who practiced in abortion clinics are required to have admitting privileges in a local hospital, and second, that clinics themselves meet the standards of an ambulatory surgical center.

These and other similar regulations are often referred to as TRAP laws, which is an acronym for Targeted Regulation of Abortion Providers, according to think tank Guttmacher Institute. These are restrictive laws and regulations that apply only to abortion providers and have the effect of placing such expensive and unrealistic requirements on these clinics and doctors that they are forced shut down, leaving the women in these areas without any access to abortion or other reproductive healthcare services. Proponents of TRAP laws say they boost safety, but the Supreme Court found Monday that it wasn't presented with sufficient evidence to prove these laws improve the quality of care, according to the Washington Post.

Or as Justice Ruth Bader Ginsburg wrote about the Whole Woman's Health v. Hellerstedt case and about TRAP laws more broadly, "Given those realities, it is beyond rational belief that H.B. 2 could genuinely protect the health of women, and certain that the law would simply make it more difficult for them to obtain abortions," Slate reported.

There are up to 26 states with strict abortion regulations, but the five with the "most burdensome" TRAP regulations include Texas, Michigan, Virginia, Pennsylvania, and Missouri, according to Guttmacher and the Washington Post. So now that Texas' laws were found to be unconstitutional it's likely the precedent will be used to overturn similar laws should they be challenged in the other four states most aggressively passing TRAP laws. But, it's worth noting that the laws won't just drop off the books because of this ruling. The laws would have to be challenged within the states to be struck down.

Missouri passed one of the first TRAP laws in 2007, requiring any provider performing five or more first-trimester abortions per year—regardless of whether they're surgical or pharmaceutical with medication— to meet the same regulatory standards as an operating room. The Pennsylvania legislature passed TRAP laws in 2011 requiring clinics to meet surgical center requirements.

Now that Texas' similar TRAP laws have been found to create an "undue burden" on women's access to healthcare by the Supreme Court, the precedent will be used to overturn similar laws in these states should they be challenged, giving this particular ruling much broader implications beyond Texas.