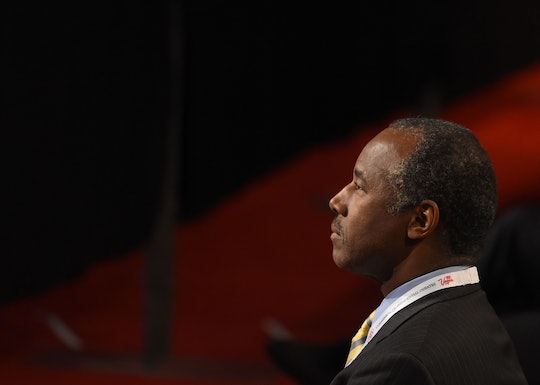 What Does The Secretary Of Housing & Urban Development Do? It's A Really Important Job

Monday morning kicked off with a fresh Cabinet appointment from President-elect Trump. He picked former rival-turned-supporter Dr. Ben Carson to head up the Department of Housing and Urban Development. And, while the gig doesn't generally make a lot of headlines, the position is critical to the economy and wellbeing of the nation. So what does the Secretary of Housing and Urban Development do? The department runs housing and mortgages across the entire country.

Carson has been rumored to be Trump's pick for HUD since around Thanksgiving, but once the word became official, critics were quick to point out Carson's lack of qualification.

Democratic House Leader California Rep. Nancy Pelosi called Carson a "disturbingly unqualified choice," according to Business Insider. "There is no evidence that Dr. Carson brings the necessary credentials to hold a position with such immense responsibilities and impact on families and communities across America."

I grew up in the inner city and have spent a lot of time there, and have dealt with a lot of patients from that area and recognize that we cannot have a strong nation if we have weak inner cities.

But living in public housing and being in charge of the branch of the federal government that ensures the lowest income Americans have safe, affordable homes and neighborhoods are two vastly different things. Most HUD Secretaries, as the New York Times pointed out, have had serious government experience. Carson, a retired pediatric neurosurgeon, has none.

The department, simply from an administrative perspective, is huge. According to FiveThirtyEight, HUD has a budget of over $50 billion and more than 8,000 employees. But in terms of potential impact on everyday Americans, HUD is hugely important.

HUD controls more than $1 trillion in home mortgage loans and helps lower wage earning Americans qualify for home loans at lower cost than they otherwise could, according to FiveThirtyEight. The department is also involved in regulating the home mortgage market, which was behind the 2008 financial crisis, FiveThrityEight reported.

HUD also runs the Section 8 Housing voucher program, which helps 5 million Americans pay for private housing and provides another 2 million with public housing, according to FiveThirtyEight.

Finally, HUD is responsible for fighting housing discrimination and enforcing the Fair Housing Act of 1968. The Obama Administration has been pressuring segregated, more affluent areas, to provide more affordable housing, a move Carson called in a Washington Times op-ed from last July a "social engineering scheme." He also argued it was unfair to bring in poor people and drive down the area's quality.

"These government-engineered attempts to legislate racial equality create consequences that often make matters worse," Carson wrote. "There are reasonable ways to use housing policy to enhance the opportunities available to lower-income citizens, but based on the history of failed socialist experiments in this country, entrusting the government to get it right can prove downright dangerous."

No, what's dangerous is putting someone with zero experience and contempt for HUD's mission in charge of the department and the Americans who depend on it's functions.