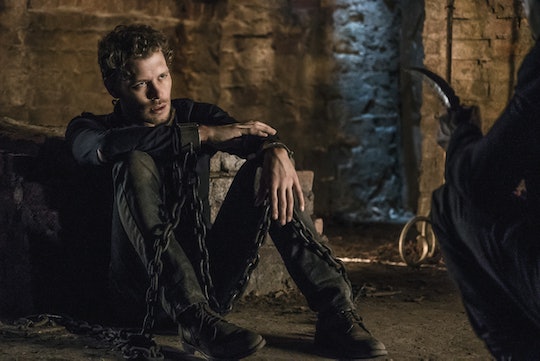 A New Evil Is Lurking On 'The Originals'

Considering everything the Mikaelsons have been put through in the past, you'd think they would've encountered as many enemies out there as humanly (or rather supernaturally) possible. And yet it seems a new Big Bad could be rearing its head. So what does the snake symbol mean on The Originals? I have a feeling it has something to do with a new villainous group that will be taking up residence in New Orleans.

Since Season 4 is only just getting started, it's going to take some time to establish just who this new evil group is behind the symbol and what exactly their endgame is, but I think it's safe to say it will mean trouble for both Klaus and Marcel in the coming weeks. Marcel's spy informed him that the symbol — which shows a snake eating its own tail — has been popping up all over the city, so he should be on the alert for an upcoming danger. What what kind of danger will it be exactly? There's talk of the witches potentially rising up against him, regardless of the fact that he has Klaus under lock and key. Perhaps they are still sick of vampires taking up so much power in New Orleans and want a change to be made ASAP.

It's a solid argument, sure, but I'm hesitant to believe it's the coven that was featured in the episode — particularly because whoever is leaving the symbol just attacked a little boy from the ranks. I highly doubt they'd be going after their own kind. That just really wouldn't make any since. Plus, he's so innocent in all of this, what would they have to gain from it? So I'm betting this will be a group we have yet to meet.

Another thing to consider is the fact that Hope is familiar with the symbol as well. At the end of the hour, she was scared and shaking on her bed while surrounded by drawings she had made of that same exact symbol. That's definitely no coincidence. She may not know why she's drawing this mysterious image, but it probably means she's connected to it in a big way. Are these people after Hope and this is their way of reaching out to her? Do they want to harm her or give her the chance to align herself with them? Let's hope this doesn't turn out to be the case. The Mikaelsons are so close to reuniting as a family. It'd be a shame if this group kept them apart.