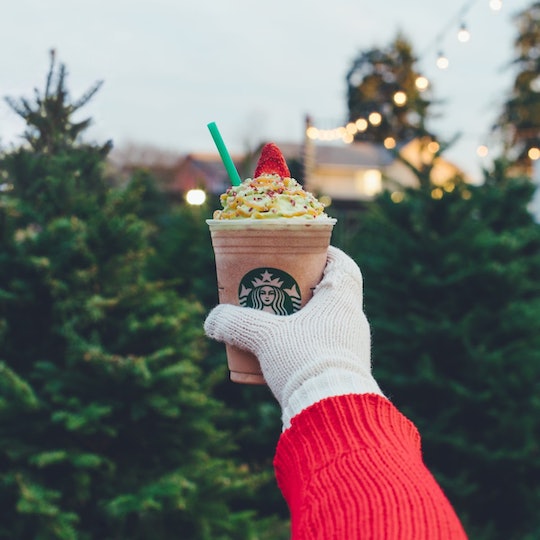 'Tis the season for Starbucks to introduce yet another holiday-themed drink, and not only is this year's offering about as seasonal as you can get, it's also designed to be supremely Instagram-friendly (much like Halloween's ubiquitous Zombie Frap): Say hello to the Starbucks Christmas Tree Frappuccino. Thankfully not pine-scented, the frozen treat is nevertheless an ambitious mash-up of festive flavors including a peppermint mocha base (the "trunk"), candied cranberries ("ornaments"), caramel drizzle ("garland"), and a generous swirl of matcha whipped cream to serve as the "tree" — oh yeah, and a dried strawberry "tree topper." Sounds about a s Christmas-y as any drink could ever be, but what does this merry melange actually taste like?

We couldn't even begin to imagine this mix of ingredients, so we took to Twitter to see what die-hard frap fans had to say. Of course there were the usual complaints about how the IRL drink doesn't quite live up to the one in the Starbucks photo (seriously people, can we stop expecting artistic miracles from the average barista?), but there were actually surprisingly few complaints about the flavors. Not only that, but it seemed like almost everyone agreed on the nature of that taste. As it turns out, the cranberries and caramel and matcha are mostly incidental: The winning flavors in this combo are mint and chocolate. This discovery seemed to come as a pleasant surprise to many:

We could be wrong, but it sounds like this one is yummier than the Unicorn Frap, for example, which promised to wow drinkers with an ever-changing mix of sweet and sour but didn't quite live up to the hype. And while this isn't the only holiday drink Starbucks is offering this year, it is the only official holiday Frappuccino so far this season (unless, of course, you want to go all "secret menu" rogue and ask for something like the Christmas Cookie Frappuccino, a mix of Toffee Nut and Peppermint in a creme base). Or if you're just as happy with a non-frap option, you could go with the new Toasted White Chocolate Mocha or the Chestnut Praline Chai Tea Latte.

Here's the thing, though — if you're thinking you might want to try this thing (or at least post a picture of it), you've gotta do it fast: The Christmas Tree Frappuccino is only available until December 11! Which is very, very soon. Honestly, while we totally get the appeal of making a product available for a limited time only, it seems sort of ridiculously early to pull the plug. There are still weeks to go before the big day! Unless... could it be? Maybe this means there will be more holiday frappuccinos to come! Let's see, the Gingerbread Frap has been done (ditto Eggnog). The S'mores Frappuccino is nothing new, but what about a straight-up Toasted Marshmallow? And as long as they've got those dried strawberries lying around, might as well try a Santa Claus Frap. We're thinking a strawberry cream with some other kind of red swirl action going on? Last year's Fruitcake Frappucino was thought to be something of a dried fruit-laden disappointment, so it's unlikely anybody will want to travel down that holiday road again. Carrot cake would likely be an even greater flop. Perhaps a Buche de Noel Frap? Each one could come with a little meringue mushroom on top! Or a Snowman Frap: White Chocolate with a little face drawn on the whipped cream with chocolate drizzle.

At the end of the day, of course, walking into Starbucks during the holiday season is a jolly enough experience. Whether it's the cups or all the red or the sugar cookies and cake pops shaped like polar bears, stopping for a drink has become as much a part of shopping for gifts as forgetting to buy wrapping paper. So go ahead and get your tannenbaum-inspired creation...Christmas fraps come but once a year!