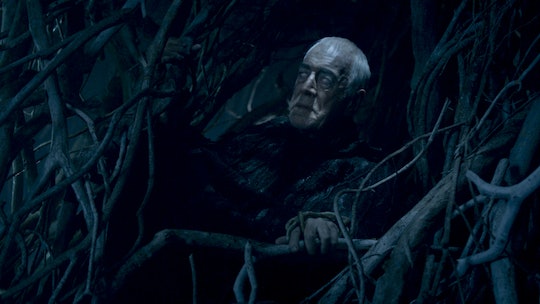 What Does The Three-Eyed Raven Do On 'Game Of Thrones'? He Doesn't Just Hang Out In Trees

While he appeared to Bran as early as Season 1 in the form of an actual raven with three eyes, it wasn't until much later that fans got a glimpse of the Three-Eyed Raven in the flesh. When Bran traveled north of the Wall, he found the Three-Eyed Raven living in his hideaway, a cave beneath a massive weirwood tree. The Raven almost seemed to be a part of the tree himself, tangled up in the roots as he was. Being stuck in a tree didn't seem to matter to the old man much as he could use his impressive powers to move beyond it without having to use his body: he could travel into visions and dreams at will.

The Three-Eyed Raven has been guiding Bran since the early days of the show, apparently always with the intention of bringing Bran to his tree cave to train. Both Bran and the Raven have "greensight," which allows them to see past, present, and future events in visions as well as go into people's dreams and warg into other living creatures. In the books, the Three-Eyed Raven is known to be the "last greenseer," which, if true, means that Bran is now the last one, giving him even greater importance.

Things are just ever so slightly different in the books; the Raven is actually called the Three-Eyed Crow, a hint to his possible past as a member of the Night's Watch (who are often referred to as crows). While on the show he does wear that signature all black ensemble, it's not certain that the connection is intentional. The Three-Eyed Raven is also incredibly old, giving him an understanding of the scope of events that goes beyond his visions. It might not have been totally confirmed, but the books heavily imply that before becoming the Three-Eyed Raven, he was Brynden "Bloodraven" Rivers, a Targaryen bastard who wielded great power as a warrior and sorcerer. He was even Hand of the King at one point.

The Three-Eyed Raven does his best to impart his wisdom to Bran, who has now been left to take over the position whether he's ready or not. It's unclear what the Raven does besides observe (and promise to tell Bran everything while at the same time refusing to tell him lots of things). Given his vast store of knowledge, one would think he'd take a more active role in the fate of Westeros, but he doesn't.

Perhaps that will end up being Bran's calling instead; he will use his powers and the perspective they give him to help whoever ends up on the Iron Throne.