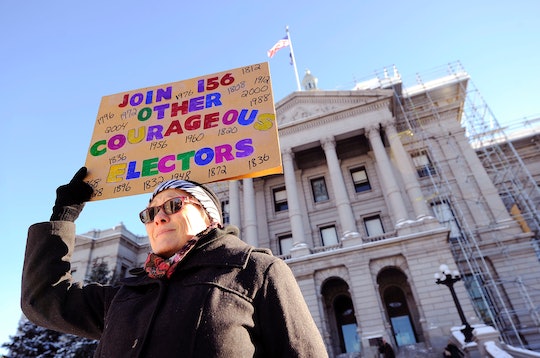 Dozens Of Electoral Votes May Have Been Illegal

The 2016 election was defined by scandal and eleventh hour reveals, at least one of which people have argued cost Hillary Clinton the election. Now, some say a new finding, part of a lengthy investigation into the practices of the Electoral College, could cost President-Elect Donald Trump the White House: What does the Trump Electoral College news mean? One report is saying that as many as 50 electoral votes may have been cast illegally.

Since Trump was elected back in November, there have been plenty of calls for further analysis of the results. Many have suggested that voter suppression and interference from Russian intelligence forces swung the election in Trump's favor, but the new argument is a direct attack on the Electoral College itself.

In a briefing supplied to Congress, prepared by a nonpartisan legal team, findings claim that as many as 50 of the college's Republican members cast their votes illegally. The report also revealed potentially unlawful votes by Democrats, but to a lesser extent. There are several rules that govern the members of the Electoral College, which outline a series of conflicts of interest that should preclude individuals from casting vote. Among those conflicts: holding multiple offices or no longer living in the congressional districts they represent. These are statutes the report given to Congress indicates several members violated.

The briefing claims that 16 of the 50 votes in question were cast by electors who no longer lived in the congressional district they represented, and 34 were cast by electors who violated the dual-office holding rule. The team behind the report, made up of pro bono attorneys and legal assistants from across the nation, have urged Congress to object to the outcome of the Electoral College's vote based on these violations, which they are still investigating and say could be in even higher numbers all-told.

Generally speaking, no one challenges the decision of the Electoral College. In order for the argument to even reach the floor, someone from within the House must file a formal complaint and get several others to co-sign it. Since the college began, it's decisions have only come into question twice. The most recent contention happened back in 2005 when members of Congress argued that voter suppression, particularly the suppression of votes cast by people of color, had lead to George W. Bush's reelection.

The number of votes in question, should they be invalidated, would technically be enough to place Trump's electoral votes below the threshold needed to win the election. Many also continue to point out that Hillary Clinton won the popular vote, a fact that Trump has consistently discounted, and he claims that he would have won the popular vote as well as the electoral vote — if so many people hadn't voted illegally (a claim he hasn't provided any evidence for). Additionally, if millions of people did vote illegally, wouldn't Trump want a recount, or a new election?

Whether or not those Electoral College votes are truly illegitimate, if anyone can prove it to Congress's liking, and if so, whether Congress would ever overturn the college's decision remains to be seen. But the discussion is definitely fueling an on-going conversation about the pitfalls and potential corruption of the Electoral College, and highlights the American public's increasing suspicion of its purpose and merit.