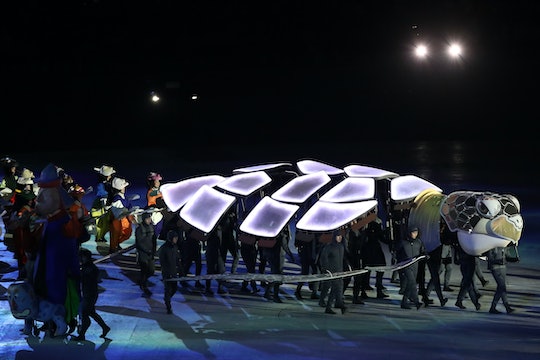 The Winter Olympics closing ceremony pays tribute to the accomplishments of the 2,920 athletes from 92 countries who competed in PyeongChang, South Korea and celebrates the international cooperation that comes with the games. And contained within the many segments of the ceremony was something that everyone's eyes were immediately drawn to: a giant, colorful and wonderful turtle. But what does the turtle at the Closing Ceremony mean? Much like the ceremony itself, it has a deep and important meaning.

PyeongChang's closing ceremony, which lasted two hours, began at 8:00 p.m. local time on Sunday night (6:00 a.m. ET in the United States). Olympic organizers promised that the 35,000 seats of the Olympic Stadium would be "filled with the roar of compliments and the applause of friendship," and they did not disappoint. A full crowd of 35,000 spectators were in attendance, including big names like Ivanka Trump, according to CNN. The ceremony was multifaceted, so here's a brief rundown of the order of events.

The ceremony began with a segment called "Countdown: Dream for Tomorrow," which was a tribute to the athletes who competed. While looking back on the last few weeks, it also looked towards the coming 2020 Summer Olympics in Tokyo and the 2022 Winter Olympics in Beijing. Next up was the ceremony's opening acts, including a video of the most notable moments of the games and the presentation of the Korean national flag and anthem. After that, the Parade of Nations segment celebrated the athletes and countries who competed.

Shortly thereafter, it was time for a tradition that has continued since the 2016 games in Rio which provides an opportunity to remember those unable to join in the festivities. The Korean version is called "A Journey to Remember," and there are three sections that follow a mystical turtle on a journey through time, according to NPR.

In this show, a turtle representing the journey through life and death creates a symbolic remembrance of those not in attendance goes with dancing kkoktu puppets — which are used in traditional Korean funerals to guard the spirits of the deceased, according to The New York Times — on an epic adventure. The first section, entitled "Turtle and Kkoktu," focuses on the turtle as he begins his journey.

The next section is called "The Time Tunnel," wherein the turtle moves through the boundary between life and death. The final stage, named "Eternal Remembrance," involves the kkotoktu puppets dancing and saying goodbye to the turtle as he makes his way to the heavens, NPR reported. This moving performance is meant to connect those at the ceremony with those who have moved on.

After the turtle has made its way to the sky, the ceremony moved on to medal ceremonies, announcements, and recognition before launching into the second hour and with it, a gold medal-worthy K-Pop concert. At this point, it was time to symbolically pass the Olympic torch from one host nation to another in the period of "transition." Here, officiators played the Greek national anthem and displayed the national flag of Greece in reference to the original Olympic Games, before nodding to both Japan and China who will host the upcoming Summer and Winter Olympics, respectively. The Olympic flag was lowered and the Olympic national anthem was performed.

Following the transition is "Farewell from a Snowflake," a segment which involved 10 Soohorang white tiger mascots and 400 performers holding LED balls in their hands to form a snowflake. The snowflake leads the procession into a huge party. Or, as the program described it:

With the EDM thumping under the brightly lit sky, DJ Raiden begins the party on the ground, joined by all the athletes for the finale of the ceremony. Raiden is followed by Martin Garrix, and the performers present the LED balls to the athletes. Raiden re-enters as DJ and continues the final segment of the closing.

At that point, the athletes hit the floor and began dancing while the Olympic flame was extinguished. At that point, the 2018 Winter Olympics had officially come to a close. After a thrilled three weeks together in PyeongChang, it was finally time to say goodbye. Until next time.