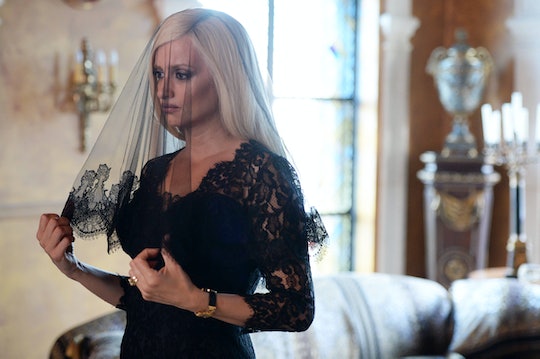 The second season of American Crime Story will focus on the 1997 murder of Gianni Versace, which rocked the fashion world, the gay community, and his family. For its source material, the Ryan Murphy-helmed anthology series used the nonfiction bestseller Vulgar Favors, by Maureen Orth, which is a decision FX and 20th Century Fox stand by. But what does the Versace family think about American Crime Story Season 2? They've now put out two statements condemning the series as "a work of fiction."

The first statement was released by the fashion house on Jan. 8 and it was pretty straightforward. According to Entertainment Weekly, it read in its entirety:

In response, the team behind the show defended Vulgar Favors as "heavily researched and authenticated," and they championed Orth's "meticulous reporting." Unsurprisingly, the Versace family issued a response to the response, contesting Orth's version of events.

According to The Hollywood Reporter, their second, much more in-depth rebuttal read:

As we have said, the Versace family has neither authorized nor had any involvement whatsoever in the forthcoming TV series about the death of Mr. Gianni Versace, which should only be considered as a work of fiction.

The company producing the series claims it is relying on a book by Maureen Orth, but the Orth book itself is full of gossip and speculation. Orth never received any information from the Versace family and she has no basis to make claims about the intimate personal life of Gianni Versace or other family members. Instead, in her effort to create a sensational story, she presents second-hand hearsay that is full of contradictions.

As just one example, Orth makes assertions about Gianni Versace’s medical condition based on a person who claims he reviewed a post-mortem test result, but she admits it would have been illegal for the person to have reviewed the report in the first place (if it existed at all). In making her lurid claims, she ignores contrary information provided by members of Mr. Versace’s family, who lived and worked closely with him and were in the best position to know the facts of his life.

Gianni Versace was a brave and honest man, who engaged in humanitarian work for the benefit of others. Of all the possible portrayals of his life and legacy, it is sad and reprehensible that the producers have chosen to present the distorted and bogus version created by Maureen Orth.

The Versace family will issue no further comment on the matter.

So it seems like that's the last we'll be hearing from them.

While it's entirely possible that Versace was "a brave and honest man, who engaged in humanitarian work for the benefit of others," as his family says, it's probably also true that his life was complicated and imperfect. As a director, Murphy has never shied away from telling complex stories (although his success rate varies), and while his version of events may not be complete, the purpose of biopics like this one is to highlight untold perspectives and show different facets of the story. One family member who seems to have made peace with the series is Donatella Versace, Gianni's sister. Murphy told Variety that she sent Penelope Cruz a flower arrangement when Cruz appeared at the Golden Globes representing the series.

"I don’t know if she is going to watch the show, but if she did I think that she would see that we treat her and her family with respect and kindness," he said. "She really is a feminist role model in my book, because she had to step into an impossible situation, which she did with grace and understanding."

You can tune into The Assassination of Giani Versace: American Crime Story Wednesday nights on FX.