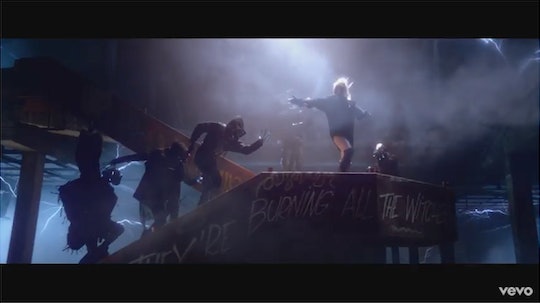 This Is What Fans Think "They're Burning All The Witches" Means In "...Ready For It?"

Promptly at midnight on Friday, Oct. 27, Taylor Swift's long-awaited and perfectly teased "...Ready For It?" music video dropped. With just one quick glance at the video, it's more than obvious that the Old Taylor is indeed dead and gone. But, some people are still left puzzled about one detail. Towards the end of the video, Swift is seen on a ledge sprayed with graffiti and lightning striking in the background, and people can't stop wondering what "they're burning all the witches" means and what hidden meaning it could have in "...Ready For It?" Don't fret, though, because Twitter has some theories.

This is indeed one of the more mysterious scenes from "...Ready For It?" and Swifties have been investigating thoroughly. It's an intense music video, for sure, and Swift plays multiple characters in it, and Twitter seems think there could be a few explanations for this ominous spray-painted phrase.

But, let's back up a bit and look at what the phrase has meant in other contexts. Some variation of the words "burning the witches" has appeared a various other songs. For example, Radiohead's "Burn The Witch," which was about placing blame on the wrong people, specifically about blaming Muslims for the refugee crisis. And there's also the 1984 album, Burning The Witches, by heavy metal band Warlock, which has a very dark, twisty, and fantasy vibe to it, kind of like the vibe seen in "...Ready For It?" So given these two examples, it's possible that Swift was maybe, somehow inspired.

Of course, it's hard to fully know what Swift was thinking when she decided on this "they're burning all the witches" scene, but Swifties are never lacking in their theories. Here's what they've theorized:

Some Think It's Teasing Lyrics For A New Song On Reputation

Only three songs to date have been released, so it very well could be a tease for an upcoming single.

Swift has a long history with West and Kardashian, but most recently the drama that blew everyone's mind was when Kardashian posted footage of West talking to Swift on the phone about his music video, "Famous," in which he raps, "I feel like me and Taylor might still have sex. Why? I made that b*tch famous."

Swift denied being OK with West calling her a "b*tch" and referring to her that way, and then Kardashian posted to now infamous chat, which revealed that Swift may have been aware of it.

It Could Be A Symbolic Reference To A Historic Witch Hunt

Back in the late 1600s, a group of young girls in Salem Village, Massachusetts claimed to possessed by the devil and accused several local women of witchcraft, according to the History.com. Hysteria quickly spread and more than 200 people were accused of practicing witchcraft, 20 of whom were executed.

Fans think that Swift may be linking her video to how they media portrays her with this centuries old witch hunt fever, if you will. Although, within the context of the entire music video, one Twitter user noted that "Witch Tay freed herself from Reputation Tay & society."

That's a very present theme in her new album Reputation. With "...Ready For It?" visuals, it's even more clear that Old Taylor is dead and New Taylor simply isn't going to take any further bashing — or witch hunting — from the media or random commenters lying down.