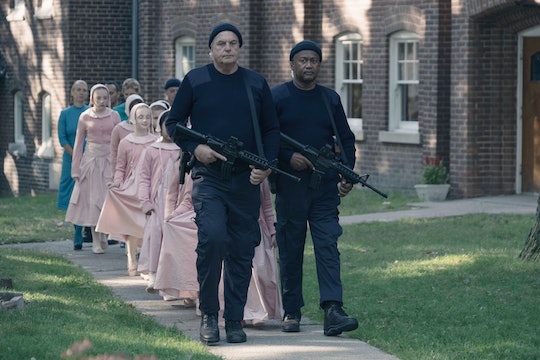 This Phrase In 'The Handmaid's Tale' Serves As A Warning

Hulu's The Handmaid's Tale often draws attention to just how much the world has outwardly changed: the flashbacks to Offred's normal life are jarring when placed side-by-side with her new one, where she dresses in color-coded pilgrim clothes and cannot speak her mind for fear of punishment. Similarly, there is a stark contrast between Offred's inner voice (which is poetic, funny, and even pointedly crude at times) and the stilted catchphrases she and the other residents of Gilead use in day-to-day conversation. One such phrase, "under his eye," is both a greeting and a farewell, as well as a subtle reminder. But what does "under his eye" mean in The Handmaid's Tale?

Gilead is a deeply conservative society that takes Christian theology to an extreme place. The idea of handmaids comes from the biblical story of Jacob and Rachel; when Rachel found she could not bear children, she urged her husband to lay with her handmaid Bilah instead (he was married to her sister Leah too, which is where the Rachel and Leah Center comes from). The phrase "under his eye" has religious connotations as well, implying that the eye of God is always watching — something that is, of course, a repeated motif in the Bible. But there's more to it than that. The phrase is also a tool of control.

Gilead's oppressive regime functions in part because it breeds an atmosphere of distrust and surveillance. Anyone and everyone could be working for the government, ready to snitch if someone puts one toe out of line. Offred says this explicitly in the first episode, where she describes her shopping partner Ofglen as her spy, just as she is Ofglen's. Everyone in Gilead is encouraged to keep an eye on everyone else just to keep them in line. The phrase "under his eye" reminds every citizen that someone is always watching.

The secret police force in Gilead are also referred to as the Eyes of God. By linking the government and God together as one all-seeing force that can and will see any wrongdoing, it makes Gilead's authority seem complete and unescapable. Everyone must be on guard at all times, and that constant paranoia prevents trust from forming. If people could trust each other and band together, they might revolt. Gilead can't have that.

Every time a character hears or utters the phrase "under his eye" (which they do a lot because it's so ubiquitous), it's a reminder that they are being watched, so they better behave. Or else.