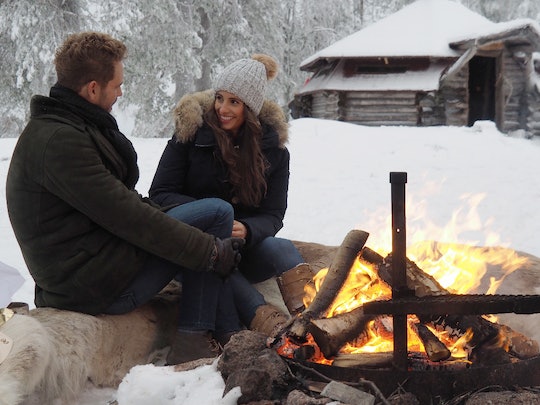 Vanessa's Feelings Of Raven Are Unclear

Every year, Bachelor Nation viewers are charmed by some of the friendships that wind up developing between contestants. Whether it's a couple of the guys on The Bachelorette bro-ing out a la Chad Johnson and Daniel Maguire or some of the women on The Bachelor becoming lifelong BFFs before our very eyes, sometimes the friendships on the show wind up being more compelling than the actual romance. Nick Viall's season seems to have turned out a surprisingly high number of post-show friendships, but what about his final two? What does Vanessa think of Raven on The Bachelor?

Much like Raven, Vanessa hasn't spoken out about her friendship (or lack thereof) with her "competitor." On their Twitter and Instagram accounts, neither of the two have posted pictures with the other. So if they are hanging out (or hung out behind-the-scenes during the season's filming) it all remained off-camera. Similarly, for what actually made it to air, there were virtually no instances of Raven and Vanessa even speaking directly to one another. Whether they had friendly chats or tense drama, it all remained on the cutting room floor, eclipsed by Corinne Olympios and Taylor Nolan's epic battle of "emotional intelligence."

There was nothing to indicate how the two feel about one another during the Women Tell All blooper reel either. Sadly, all we got was Raven stuffing cheese cubes into Corinne's mouth like a rodent.

Oh, who am I kidding, that wasn't sad at all — it was brilliant.

On the other hand, Vanessa did end up bonding with one other contestant in particular: Danielle Maltby. Bach Nation fans on Twitter were all about Vanessa and Danielle's friendship goals, and since the season wrapped filming, the two have definitely hung out together and showed one another plenty of love online.

"While I didn't end up engaged, I learned an invaluable amount about myself. Formed the most dysfunctional and amazing sisterhood, and got this one out of it," Danielle captioned a photo of herself and Vanessa that she posted shortly after her elimination episode aired.

Vanessa was also part of the group who went to visit Danielle in Nashville, along with Taylor, Christen Whitney, and Kristina Schulman.

It's understandable that Vanessa and Raven might not have bonded. After all, as the two who have made it the farthest in the competition, it's likely (if not virtually guaranteed) that they'd come to view each other as rivals. At the very least, most women probably don't feel inclined to be close friends with their recent ex-boyfriend's brand-new fiancée.