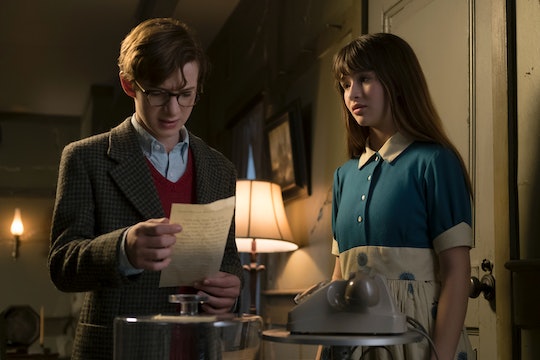 (Warning: this post contains unfortunate spoilers from Episode 8.) While there's plenty of unfortunate events in Netflix's new series, there's also a bit of mystery. Amongst the many questions that arise on the show there's one that stands out: what does V.F.D. mean in A Series of Unfortunate Events? The three letters appear constantly in the first season of the show. They're seen during Klaus' sketchy eye exam with Georgina and and if you look closely on the spy glass that he carries around, the letters can be found in design. Violet and Sunny even stumbled upon a dictionary titled Verified Functional Dictionary, while looking for the truth about their parents and the fire at the mill. The title, if abbreviated, becomes V.F.D., and inside the dictionary was a note from their father. So when you factor all that in, the letters must mean something important, right?

Now, if you've read the novels you know exactly what V.F.D. stands for. If you haven't read the books yet and don't want to be spoiled, it's best you look away now. Book spoilers ahead! (Final warning... OK let's do this!) In the book series, V.F.D. stood for the Volunteer Fire Department, the name of the secret society the Baudelaire and Quagmire parents were in. Throughout the series, the actual purpose of the society is never really clarified, but the members participate in academic pursuits, cryptography, disguise training, crime prevention, espionage, animal conditioning projects, and social activism.

The "fire" part of the group's name refers to both literal and figurative fires. The early discussion about literal vs. figurative on the show seems to be of more significance now than it first seemed. Additionally, after the Quagmire parents returned home Mr. Quagmire said there were fires everywhere "both figuratively and literally," and his wife responded that they needed to mount a "vigorous fire defense."

The members of the society were meant to be a heroic group, but over time and due to various issues, many of the members ended up splitting up and going their own separate ways. So far on the show, there have been appearances from a few other members of the society, including Dr. Montgomery Montgomery, Aunt Josephine, Jacquelyn, and Gustav. It also seems fair to assume that Count Olaf was once a part of the group as well, although he is now their enemy. And, of course, Lemony Snicket knows so much about all this, odds are he's probably involved somehow as well. (He and Count Olaf did go to school together.)

Hopefully, A Series of Unfortunate Events gets renewed for a second season, so we can learn more about this mysterious society and who out there is so adamant to target and kill former members... with fire, no less.